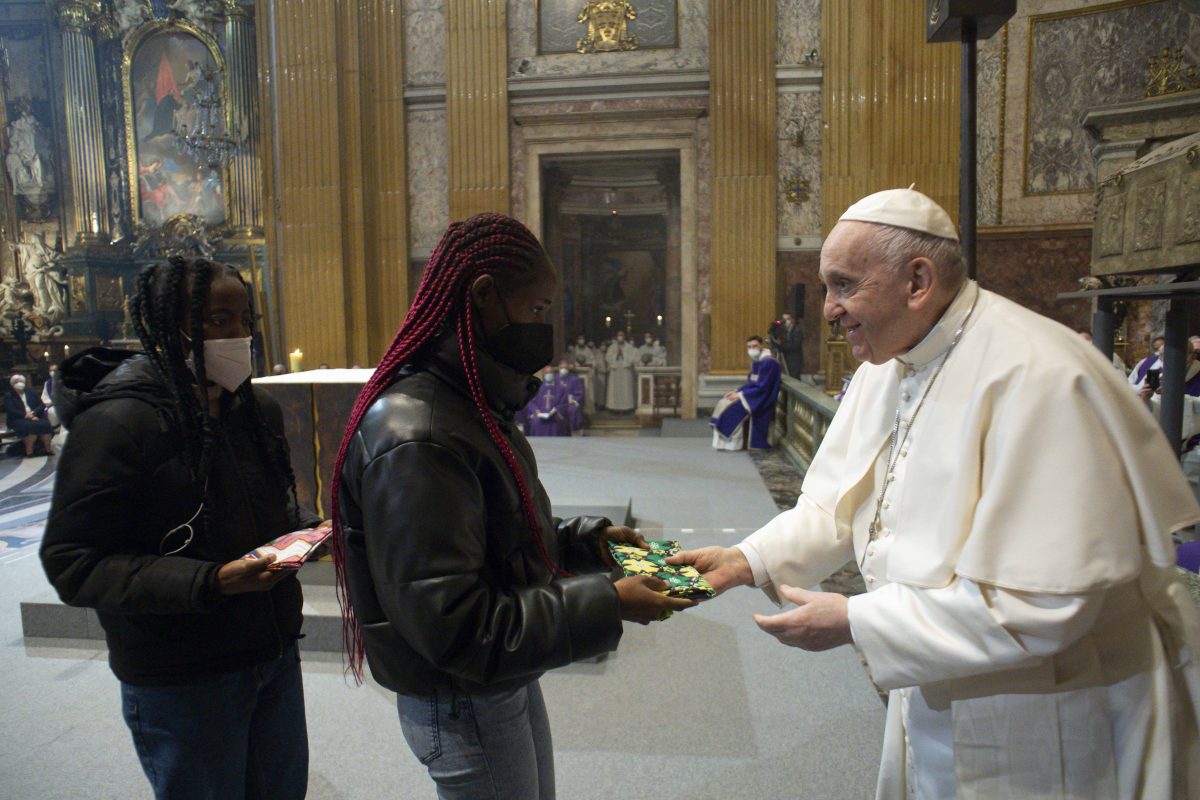 Prayer is a mission to bring hurting world to God, pope says

The call to prayer is an “active mission,” one that does not take a believer from the world but prompts the believer to bring to God the pain and concerns of the world – including the war in Ukraine, Pope Francis said.

“To pray is to bring the beating heart of current affairs into God’s presence, so that his gaze will shine out upon history,” the pope said at Mass on 12th March at the Jesuit Church of the Gesù in Rome.

The Mass marked the 400th anniversary of the canonisations of the Jesuit Sts. Ignatius of Loyola and Francis Xavier, as well as Sts. Isidore of Madrid; Teresa of Avila, founder of the Discalced Carmelites; and Philip Neri, founder of the Oratorians.

Cardinal Carlos Osoro Sierra of Madrid and the superiors general of the Discalced Carmelites, the Oratorians and the Jesuits blessed the relics of the five saints at the end of the Mass and prayed that they would continue to inspire Catholics to follow their examples.

Pope Francis, who has had severe knee pain, did not preside at the Mass but gave the homily. The principal celebrant was Father Arturo Sosa, superior general of the Jesuits.

While the focus of the Mass was on the five saints, Russia’s war on Ukraine was not far from people’s attention. And the woman who sang the responsorial psalm wore a scarf of yellow and blue, the colours of the Ukrainian flag.

Pope Francis’ homily focused on discipleship and the Gospel story of the transfiguration of Jesus, but he, too, remembered the war and its victims.

Speaking of prayer, he told his fellow Jesuits that sometimes prayer can feel like a “force of habit or a certain daily ritual” that seems no to have the power to change individuals or history.

But, the pope insisted, “if prayer is living, it ‘unhinges’ us from within, reignites the fire of mission, rekindles our joy and continually prompts us to allow ourselves to be troubled by the plea of all those who suffer in our world.”

“Let us also ask ourselves how we are bringing the present war to our prayers,” he said.

Christians, he said, “must not be afraid to touch the wounds” of men and women today, “because they are the wounds of the Lord.”

The image of the disciples going up the mountain with Jesus, Pope Francis said, should speak to Jesuits of their mission to go outward and upward always.

Pope Francis said the devil always tries to convince believers “to keep to the path of sterile but comfortable routines and familiar landscapes, whereas the Spirit impels us to openness and to a peace that never leaves us in peace. He sends disciples to the utmost limits.”

Part of that faith, the pope insisted, is recognising that Jesus calls all his followers to be part of a community.

“Let us never tire of asking for the strength to form and foster communion, to be a leaven of fraternity for the church and for the world,” he told the Jesuits. “We are not soloists in search of an audience, but brothers arranged as a choir.”

Picture: Pope Francis accepts gifts from refugee women being assisted by Jesuit Refugee Service, at the conclusion of a Mass marking the 400th anniversary of the canonizations of Sts. Ignatius of Loyola, Francis Xavier, Teresa of Avila, Isidore of Madrid and Philip Neri, at the Jesuit Church of the Gesù in Rome on 12th March 2022. (CNS photo/Vatican Media)