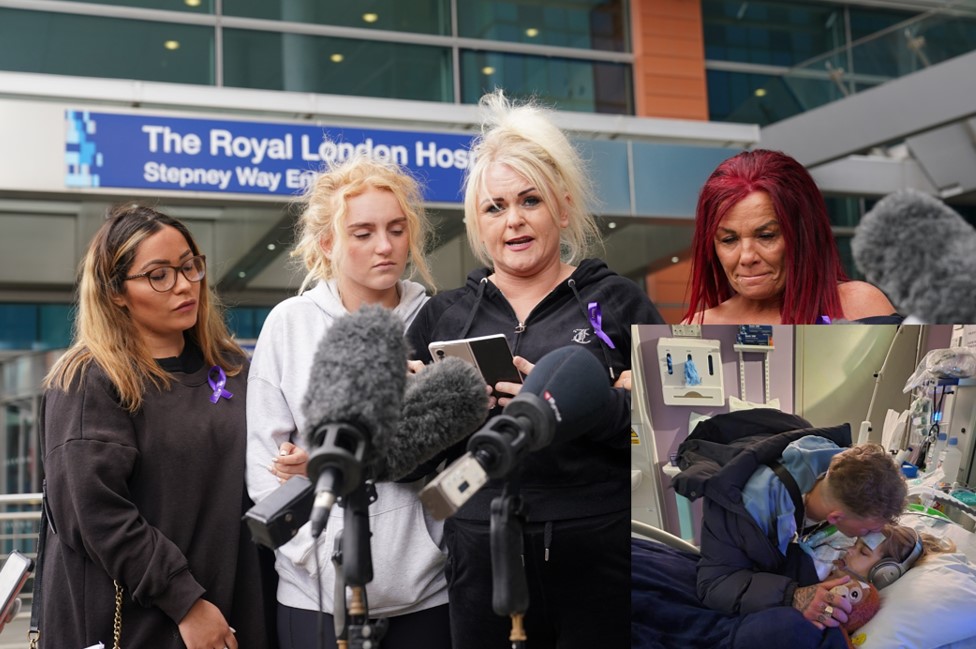 The “devastated” Catholic parents of a 12-year-old boy at the centre of a life-support treatment dispute have been given the green light to begin an appeal bid after a High Court judge concluded the youngster was dead.

Doctors treating Archie Battersbee at the Royal London Hospital in Whitechapel, east London, thought that the youngster was “brain-stem dead”.

They said life-support treatment should end and Archie should be disconnected from a ventilator. Their request to appeal the decision has now been granted.

A spokeswoman for Archie’s family said relatives are ‘delighted’ by the  appeal decision.

“We were all really convinced that we weren’t going to get permission to appeal,” added Ella Carter.

“So we’re more than happy at the decision – we’re delighted.”

Mrs Justice Arbuthnot recently ruled that doctors could lawfully stop providing treatment to Archie. She gave Ms Dance and Mr Battersbee permission to take the case to the Court of Appeal.

She had previously ruled that Archie, who suffered brain damage in an incident at home in April, was dead and said doctors could lawfully stop treating him.

Edward Devereux QC, who represents Archie Battersbee’s parents, outlined a number of “grounds of appeal” in a written submission to the hearing over whether his life-support treatment should be ended.

– An application for a declaration of death was an exceptional category of case that required the court, notwithstanding that these were civil proceedings, to apply a standard of proof of beyond reasonable doubt;

– The court erred in extending the common law definition of death to include brain stem death;

– In relation to the declaration of death, the court erred by failing to accommodate the religious views of Archie and his family.

– Where no brain stem testing was able to be carried out on an individual in a case such as this, the court should start… from a presumption that a person is alive.

– The court’s assessment of individual matters… was flawed;

– The court erred in determining that there was a sufficient evidential basis for making a declaration of death.

– The court’s analysis of best interests was flawed;

– The court erred in determining that the hearing should take place in private.

Mr Devereux said in civil court cases judges normally made decisions on a balance of probabilities – not on a criminal court “beyond reasonable doubt” basis.

But he said the decision was of such “gravity” that it should not be made on the balance of probability.

He told Mrs Justice Arbuthnot: “An application for a declaration of death is an exceptional category of case that required the court, notwithstanding that these are civil proceedings, to apply a standard of proof of beyond reasonable doubt.”

Catholic ethical institute The Anscombe Bioethics Centre backed the family appeal. “It seems extraordinary that questions of life and death should be matters of a balance of probability rather than determination beyond reasonable doubt,” the institute said. They added that the ruling is ‘in clear conflict with Catholic medical ethics.’ The Anscombe Bioethics Centre is an Oxford-based research institute serving the Catholic Church in the UK and Ireland.

“The concept of brain death was developed in the context of the practice of organ transplantation and the family of Archie Battersbee were upset that the doctors had started talking about organ donation within three days of his admission to hospital, long before the date that the judge subsequently gave as the date of Archie’s death.”

“More concerning still is the fact that the judge regarded it as in the best interests of Archie to have ventilation withdrawn, even though he was not in pain and even though he had expressed a view that he would wish to receive life-sustaining treatment,” they said.

Archie’s parents are being supported by the Christian Legal Centre.

Chief executive Andrea Williams said after Mrs Justice Arbuthnot’s appeal decision: “A ruling that says death can be declared on the balance of probabilities sets a troubling precedent for our society and must be appealed.

“This case is the first of its kind in an English court and has raised significant moral, legal and medical questions as to when a person is dead.

“Archie’s parents believe that the time and manner of his death should be determined by God and claim a right to pray for a miracle until and unless that happens. That belief must be respected.

“The ideology of ‘dignity in death’, meaning a planned time of death as fixed and carried out by the doctors, should not be brutally imposed on families who do not believe in it.

“We will continue to stand with the family as they appeal the ruling and continue to pray for a miracle.”

Ms Dance added: “Basing this judgment on an MRI test and that he is ‘likely’ to be dead, is not good enough.

“The medical expert opinion presented in court was clear in that the whole concept of ‘brain death’ is now discredited, and in any event, Archie cannot be reliably diagnosed as brain-dead.”

The judge heard that Archie suffered brain damage in an incident at home in early April.

Ms Dance told how she found him unconscious with a ligature over his head on 7th April and thinks he might have been taking part in an online challenge.

The youngster has not regained consciousness.

Archie and several members of his family were received into the Catholic Church at Easter.

Mrs Justice Arbuthnot concluded that Archie had died “at noon on 31st May 2022”, shortly after the most recent MRI scans had been taken.

The judge said that, had she not concluded Archie is dead, she would have ruled that it was not in his best interests to continue to receive life-support treatment.

Picture: Archie Battersbee’s brother Tom Summers kissing Archie on the head in hospital. Archie Battersbee’s mother, Hollie Dance, (centre-right) speaking outside the Royal London Hospital in Whitechapel, east London, after the High Court judgement on the future of the 12-year-old boy at the centre of a life-support treatment dispute after suffering brain damage

UAPs Key Questions
Previous Post
Pope Francis: To evangelise is to live the Gospel, then share it