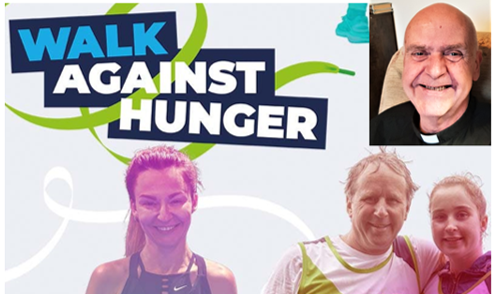 Instead of doing the suggested 5km per day over 40 days of Lent, retired priest Peter will be walking 200km in 13 days. Peter will be walking the length of the Portuguese Camino from Porto to Santiago de Compostela in Spain – an ancient pilgrim route at least a thousand years old. Peter has a fundraising goal of £10,000.

Peter is currently training for his walk in the Bedfordshire area, particularly the public footpaths between Houghton Regis to Luton town. His challenge starts on 2nd April, and he plans to reach Santiago de Compostela in 13 days. Peter has been on various pilgrimages and has visited many shrines all over the world, but never the Santiago de Compostela.

“I will be walking the Portuguese Camino which is less popular than the French Camino but promises much beauty,” he says. “I will start in Porto and head north along the Atlantic coastline before turning inland for Compostela. I look forward to being in Compostela to join in the Holy Week and Easter services.”

“I believe that people often overlook the suffering which goes on in other countries-it just doesn’t receive enough attention,” he said.

CAFOD supports communities in the long-term through training people in farming methods, and savings and loans schemes which can help people to start small businesses. CAFOD’s Deborah Purfield paid tribute to Peter’s efforts.

“So many of our wonderful CAFOD volunteers and supporters are rising to the challenge and Walking against Hunger this Lent,” she said. “They want to support communities to tackle global hunger and malnutrition. I’d like to say thank you to our supporters, particularly Peter Stannard who is planning such an arduous walk in solidarity with our brother and sisters who are in great need. What an inspiration he is.”

Here is a link to Peter’s Just Giving page.