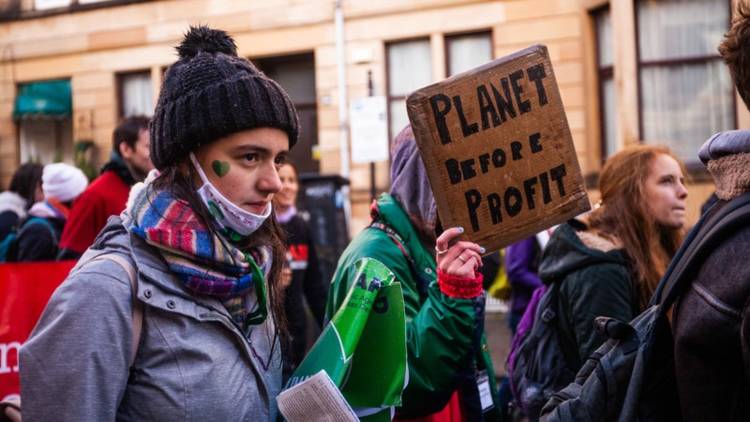 A Catholic who marched in Glasgow says that prayer, action and political pressure are essential if change is to emerge from the COP26 conference.

Joshua Nichol, a member of CAFOD’s Young Adults Delegation to COP26, said that Catholics must pray sincerely, act and speak out.

“God, like Greta Thunberg, seeks not the ‘blah blah blah.’ Prayer cannot just be words. We need our actions to match our prayers,” he said.  “I urge every person of faith to use their voice to keep holding politicians accountable for the stewardship of our common home. Our future depends on the actions we take now,” he said.

Joshua Nichol told Universe Catholic Weekly: “Being met by a multitude of COP branding, it’s easy to see why some have criticised the crucial climate conference as a mere greenwashing event.”

‘Greenwashing’ is a term used to describe a form of marketing spin in which green PR and green marketing are deceptively used to persuade the public that an organisation’s products, aims and policies are environmentally friendly.

“When Pope Francis wrote in 2015 that “the earth is among the most abandoned and maltreated of our poor”, it came in the months preceding the Paris Climate Agreement,” Joshua added.

“As countries failed to act to implement Paris fully – America even pulling out of the agreement altogether – the emphasis on Glasgow is real.”

He believes real change will not come from ‘negotiators locked away in discussions’, but from the streets, where he took part in a large climate march involving over 100.000 people.

“There was a sense of the gravity of the situation felt on the streets of Glasgow. But it didn’t come from the conference floor, nor did I find it palpable in the Green Zone. Hundreds of the 100,000 strong crowd gathered in God’s name. The true sense of action was found in moments of prayer during the climate action march,” he said.

Joshua is currently working as a Faith in Politics intern in Parliament.  Faith in Politics is a Catholic Parliamentary and Public Affairs internship scheme. The scheme offers a foundation of Catholic faith and spiritual formation for those who believe they may have a vocation to public service in politics or public affairs.