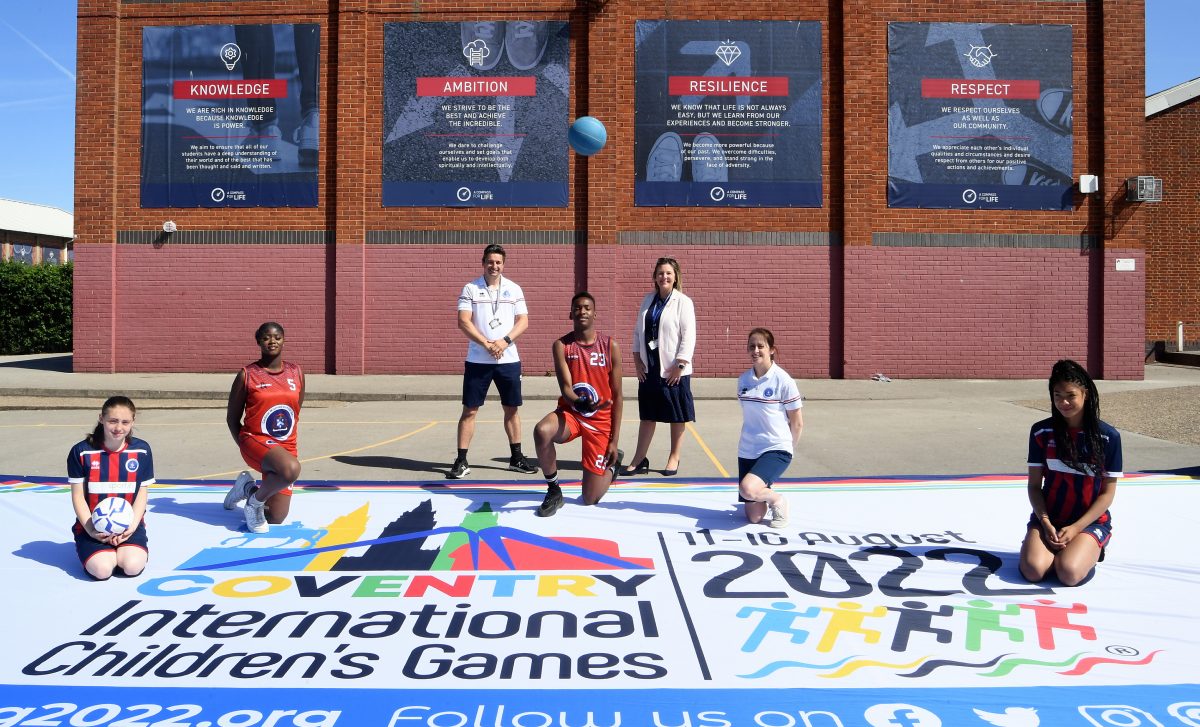 Students at a Catholic secondary school in Coventry will compete on the international stage when a global competition heads to the city.

The International Children’s Games arrives in Coventry from Thursday 11th August until Tuesday 16th August, and four students at Cardinal Wiseman Catholic School, part of the Romero Catholic Academy, are hoping to make use of home advantage against their globetrotting rivals.

There are more than 1,500 participants aged 12-15 years from over 70 cities across five continents coming to Coventry to compete this summer. Helena Seraphin, Deanna Salt, Olivia Ayres and Josh Okoduwa will be representing Coventry in basketball and football.

Deanna’s performances in the regional girls’ football tournament earned her a call up to the Coventry Girls football team, where she will join Olivia, a fellow key player for Wiseman’s girls’ team, in the Coventry side for International Children’s Games in August.

Deanna was also the most valuable baller in Wiseman’s recent victory in the KS3 girls Coventry Schools Basketball League final, but opted for football as her preferred sport.

Helena played a pivotal role in the KS4 Wiseman girls’ basketball team which reached the regional schools final this year, earning herself a call up to the Coventry side. In the boys’ competition, Josh was also chosen to represent Coventry after helping his KS4 boys’ team to reach the regional final.

The Games, which are sanctioned by the International Olympic Committee, are set to take place three days after the Birmingham 2022 Commonwealth Games conclude and on the back of Coventry’s year as UK City of Culture.

Athletes will take part in seven sports over three days. Coventry’s Games will be making history as disability or para-athlete elements will be incorporated for the first time in the history of the International Children’s Games.

Lisa North, Head of Girls’ PE at Cardinal Wiseman Catholic School, said: “We are all extremely proud of the work that our pupils put in when training and representing Cardinal Wiseman.

“These four pupils have consistently shown our school values and it is an honour to put forward these pupils to represent our school and PE department at the ICG this Summer.

“Basketball and football have been our most successful activities in the last few years and we have strived to build on our success through intensive training and fixtures, helping us to strengthen our position as a formidable force in the city when competing in these sports.

“It therefore came as no surprise that we have had several of our pupils chosen to participate in these events, representing Coventry at the ICG in the Summer. We wish them the best of luck, and hope they enjoy the occasion.”

Danny Kingham, Team Coventry Manager, said: “I’m really excited for the upcoming International Children’s Games. The event is going to be absolutely amazing and I’m looking forward to working with all the athletes that are part of the team.

“The children at Cardinal Wiseman are an absolute credit to their school, they displayed all the values we were looking for at the selection events so it was a pleasure to invite them to be part of Team Coventry.”