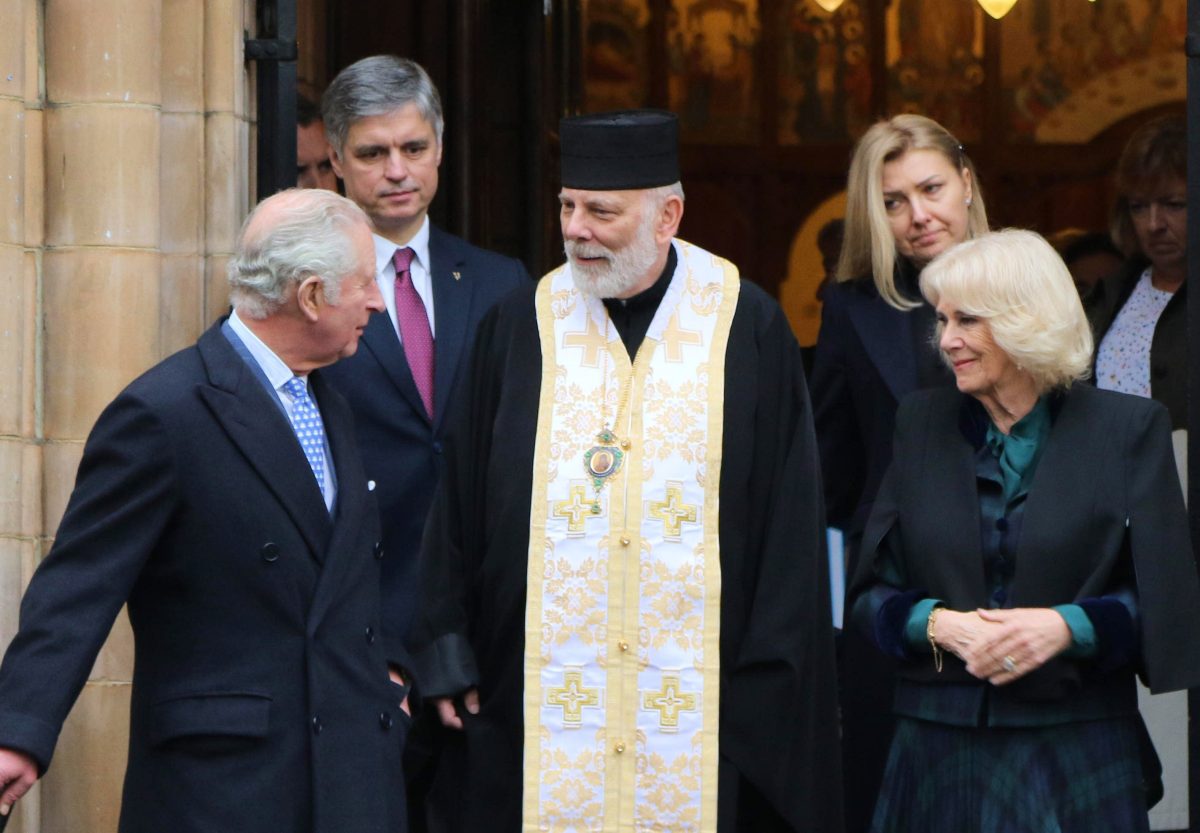 Prince Charles visited the Ukrainian Catholic Cathedral in London to find out how he could assist in the humanitarian crisis emerging from the war in Ukraine.

The prince and his wife, Camilla, the Duchess of Cornwall, were welcomed by Bishop Kenneth Nowakowski of the Ukrainian Catholic Eparchy of the Holy Family at the cathedral in London on 2nd March along with Vadym Prystaiko, the Ukrainian Ambassador to the U.K., and his wife, Inna Prystaiko.

They met Ukrainian relief workers and children who presented them with handmade signs in the yellow and blue colors of the Ukrainian flag, some of which bore messages such as: “Save Ukraine,” “Stop Putin” and “Stop the war.”

According to reports in the British media, Prince Charles gave a short address in the cathedral, in which he praised the “extraordinary bravery, generosity and fortitude of the Ukrainian community” in the face of the ongoing invasion of Ukraine by Russia.

The couple was accompanied by representatives of humanitarian charities of which Prince Charles is a patron or a supporter, including the British Red Cross, World Jewish Relief, In Kind Direct, the International Rescue Committee and International Health Partners.

Shortly before they departed, the prince and the duchess laid two sunflowers, the national flower of Ukraine, on the altar.

At a news conference in the cathedral soon afterward, Canadian-born Bishop Nowakowski said the visit represented a “very important day” for the Ukrainian community.

He told journalists that Prince Charles and the Duchess of Cornwall wanted “to express their solidarity with the Ukrainian people.”

“They had an opportunity to be in the cathedral to light candles and say a prayer and then they joined us in our auditorium, where they were able to meet Ukrainian volunteers who have been working very hard since the beginning of the war eight years ago, but especially in these last few days — organising humanitarian packages, organising rallies and being with other people.”

“What I think was most meaningful for me was the prince also encouraged a few of the humanitarian organisations that he is patron of to join us as well,” he continued, adding that Charles wanted people to donate to humanitarian organizations assisting refugees and other victims of the conflict.

He said: “The fact that they spent so much time reassuring and expressing their solidarity with us, it was a very important day for us.”

Olesya Khromeychuk, director of the Ukrainian Institute London, told the news conference that it was difficult to estimate how many people would flee Ukraine and require humanitarian assistance and sanctuary.

“You have probably all heard an estimate of 4 million or something like that,” said Khromeychuk, whose brother was killed fighting Russian troops in 2017, “and I saw in passing that the figures stands at 800,000 right now.”

“It depends on what happens in Ukraine,” she said.

Khromeychuk said Russian forces were not only firing missiles from inside the exclusion zone of Chernobyl, the scene of a disastrous explosion in 1986, but were also shelling a region in the southeast of the country that is home to the largest nuclear power plant in Europe.

She said that, if the plant were hit, it would be a disaster for the whole of Europe and would trigger a large movement of refugees from Ukraine.

She also said many others would also flee from the floods resulting from any Russian moves to destroy hydroelectric plants and dams previously blown up by both the Soviets and the Nazis during World War II.

But a general Russian occupation was enough to cause a refugee crisis, she added.

“We know what Russian occupation is like-we have lived with it for eight years in Crimea and in Donbas,” she said. “In Donbas, there is a concentration camp … I have never heard descriptions of such brutality in my life.

“We know what occupation is like, and people will be leaving if that happens for obvious reasons.

“This is another reason why civilians are taking up arms. Absolutely, they are totally brave and I am fascinated by the way Ukrainians have come together to stand and defend their cities. But it’s nothing to celebrate that civilians feel the desperate need to arm themselves,” she said.

We weep before God for Ukraine, says Archbishop
Previous Post
Pope: ‘Rivers of blood’ flowing in Ukraine and Vatican ready to help