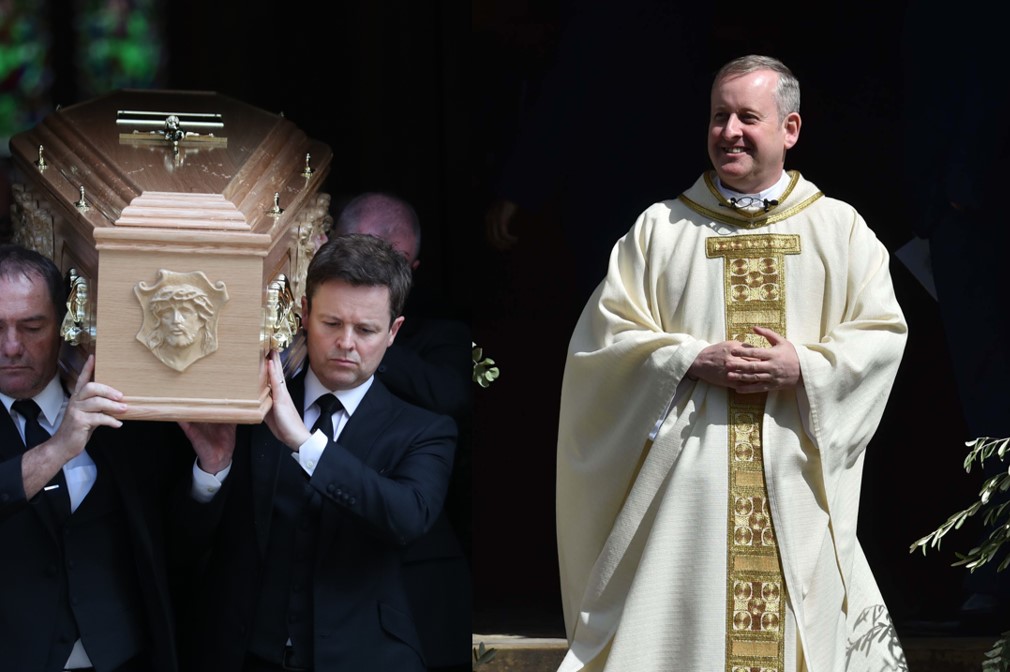 Declan Donnelly has paid an emotional tribute to his priest brother, telling mourners that his family “can’t believe he’s gone”.

Father Dermott Donnelly, who had recently celebrated 30 years of service as a priest, died in hospital earlier this month after falling seriously ill.

Hundreds gathered at St Mary’s Cathedral in Newcastle for Father Dermott’s Requiem Mass on Friday, with more than 2,000 watching the service on a livestream.

Father Dermott, 55, was best known for his work with young people and youth ministry.

Mourners at his funeral heard he was a “gifted priest” who “dedicated himself every day to the service of others”.

Paying tribute to his brother during the requiem Mass, ITV star Declan fought back tears as he said: “Unfortunately today our world is a slightly worse place because Dermott is no longer with us.

“We can’t believe he’s gone, we still can’t understand why he’s gone – but we trust God took him because his talents were needed elsewhere. We as a family will miss him immeasurably.”

He thanked the congregation for “all the amazing tributes and messages of support”, saying the family had been “simply overwhelmed by the kindness we’ve been shown”.

He said Father Dermott had been the middle child of seven, and told how they grew up in a three-bedroom house in Newcastle, with the four boys in one room and the three girls in the other.

Declan praised his brother’s “fantastic sense of humour and fantastic sense of adventure”,and said his wish to be a priest was “definitely there from an early age” as their mother Anne remembered him wanting to “play Mass” as a child.

He said Father Dermott was passionate about his work with young people, “giving [them] hope, spiritual guidance and a feeling of self-worth”.

He also joked about his brother’s extensive fundraising efforts, saying: “You name it, Dermott monetised it.”

During the homily, Séamus Cunningham, bishop emeritus of the diocese of Hexham and Newcastle, paid a heartfelt tribute to Father Dermott’s ministry to young people.

“He spoke their language, he touched their hearts-his words from his heart touched the hearts of many,” he said. “He wanted them to get to know Christ, to enter into a deep and personal relationship with Christ.”

Bishop Séamus described Father Dermott as “a quiet, unassuming man with no airs and graces”. He addressed Father Dermott’s mother Anne directly, thanking her for raising Dermott as a ‘man of faith’, a ‘unique individual’ and a ’man of vision and compassion’, who gave his life as a priest to working with young people.

“Christ was at the centre of Dermott’s life and priesthood,” Bishop Séamus said.

“He was a very powerful instrument in the hands of God. Dermott was a man who relied on the power of the Spirit to lead and guide him. YMT went from strength to strength under his leadership.”

He pinpointed the ‘Flame Train’, when Father Dermott chartered a train from Newcastle, transporting over a thousand young people to Wembley Arena, London, for the youth event, Flame, as an example of Father Dermott’s impact.

“Flame was a wonderful experience for many people, including myself-I’ll never forget that Flame Train,” Bishop Séamus said. “They (young people) encountered Christ with ten thousand other young people, and they were on fire, touched in a very powerful way. Dermott was always himself. He played a very important part in making that Flame event come about.”

The bishop reminded those gathered of the promise of the resurrection for Dermott and everyone.

“As we miss Dermott, we think of what is to come,” he said.

“Death is not the end-the end of this life leads us to the threshold of a new life. Belief in the resurrection is to grasp a gift that is given to each human being. Life in Christ will never end; we too place our trust in that promise.”

Current Hexham and Newcastle Bishop Robert Byrne offered his condolences to Father Dermott’s mother and siblings, as well as extended family who had travelled from Ireland.