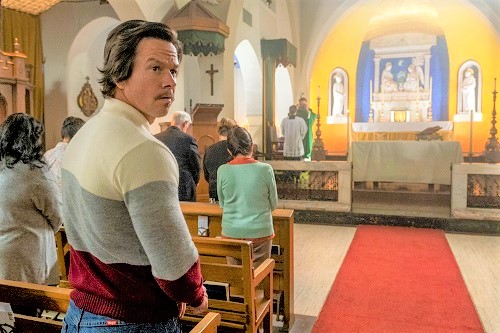 Mark Wahlberg’s Father Stu will leave you teary-eyed and have a powerful impact, says Kristina Cooper.

I really liked “Fr Stu”, released in the UK cinemas on 13th May. It’s a  biopic of a little known Colorado priest, Fr Stuart Long, who died in 2014 at the age of 50 of a degenerative muscular disease after a very colourful early life and conversion to Christ.

The film stars two of Hollywood’s most high-profile Catholic A-listers-Mark Wahlberg in the title role and Mel Gibson as his grizzled estranged father.

The script by Rosalind Ross, who also directs, rattles along with both humour and pathos and the acting is excellent.  Reading the vitriol against it from some secular film critics, however, would make one wonder if we had all been watching the same film.

The engaging performance of Mark Wahlberg, better known for his action films, is a tour de force and Oscar-worthy, although I doubt if he will even get a sniff.

Wahlberg gets to show his impressive torso in the early scenes fighting in the ring, but he also put on 30 lbs-apparently through a 7- 11,000 calories a day diet-to  portray Fr Stu in his final years, when the priest’s body is steroid pumped and ravaged by his terrible illness.

The end of the film is particularly moving, with the queues of people outside Fr Stu’s care home patiently waiting in line to be ministered to by him.

The film shows how it’s often those who have been the biggest sinners, and who have experienced God’s mercy the most, who are the best at sharing God’s love with others.

The film takes the viewer through the classic stages of conversion. We see the Church through Stu’s eyes and how macho pride ultimately surrenders to the Christ as he discovers strength in weakness.

I loved some of Stu’s bewildered mother’s comments (Jacki Weaver) who can’t understand what is going on with her son.

Mark Wahlberg, after something of a misspent youth himself, is now a fervent Catholic and one can see how the film might have appealed to him.  He was apparently pitched the idea by a couple of priests over dinner.

The key character is one that obviously resonated with Wahlberg, and it is down to him that the film was eventually made. It is obviously a labour of both love and faith and the actor put a substantial amount of his own money into the project.

One senses that Wahlberg wants Fr Stu’s story to touch those who are lost and struggling with life, and help them to find the God he himself has found. Even though the film is an exciting redemption story, it is a film which demands a response. You will either be moved and inspired or irritated by the message and will hate it.

I did reflect that I might have felt very different about the message if Stu had ended up in the Moonies or Scientologists rather than the Roman Catholic Church.  But it is worth taking the risk of bringing a lapsed Catholic or agnostic relation/ friend to the film as it could have a powerful impact.

But don’t be too disappointed if you are in floods of tears by the end and they are gimlet eyed.  A seed might have been planted and there’s lots to discuss.