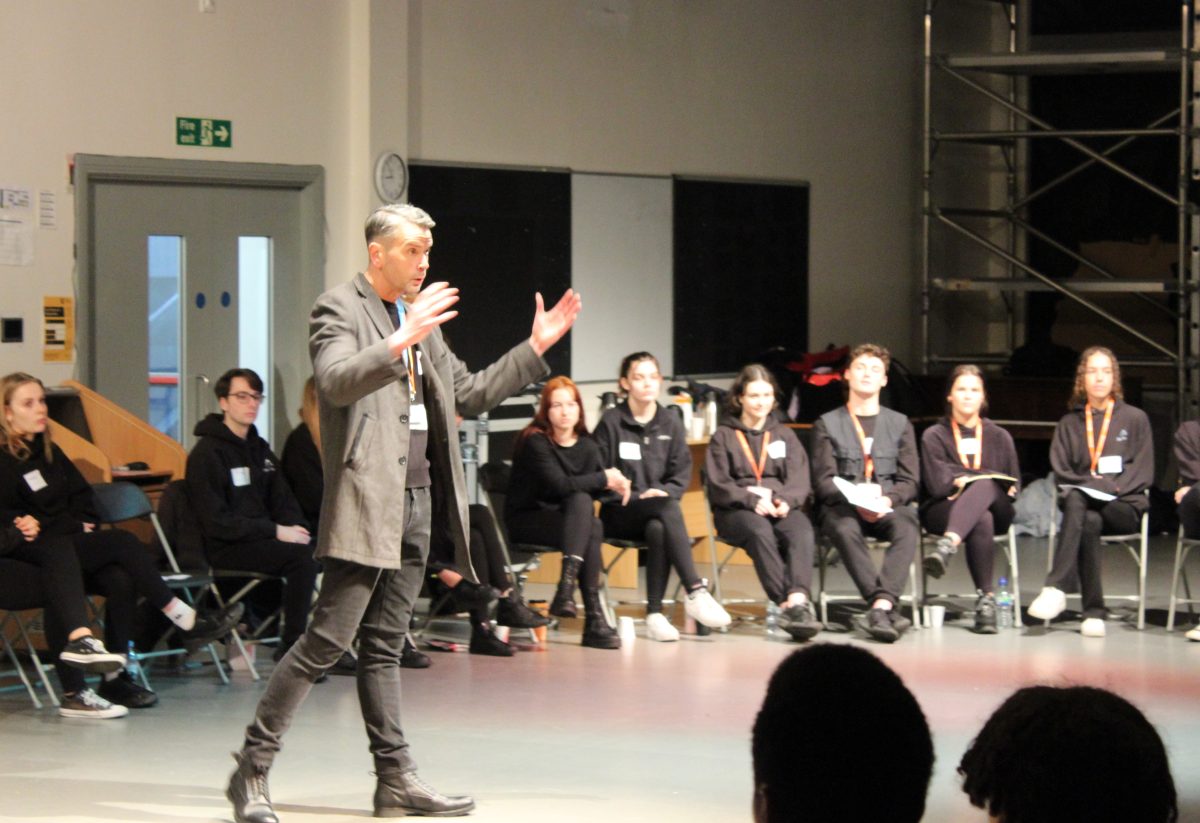 Year 9 pupils from St Paul’s Catholic High School, Wythenshawe, were recently visited by staff and students from UCEN Manchester to take part in a Shakespeare workshop focusing on Macbeth as part of the Uni:Connect project with Greater Manchester Higher.

Over 30 talented trainee student actors from UCEN Manchester’s The Arden School of Theatre (Northern School of Dramatic Arts) were invited into school to perform Shakespeare’s Macbeth. They were accompanied by Arden’s Devising Director, Alan French, and Nawshin Khan, Outreach Coordinator from GM Higher.

Over 180 students aged 13-14 watched the live performance, each took part in a fun and stimulating two-hour drama workshop led by the UCEN students, completing related research and writing activities around themes and social context in class. Students were totally new to the play and will study this as part of their English Literature GCSE course next year.

The event was fully funded by GM Higher, a collaborative local network working in partnership with the national Uni Connect programme. GM Higher aims to raise the aspirations of young people in Greater Manchester and promote and facilitate access to higher education.

Ms Laura Fannon, English teacher, spoke of the ‘engaging’ event.  “Our pupils got so much from this event and we have received overwhelmingly positive feedback from the sessions they participated in,” she said. “The performances from the UCEN students were engaging, even riveting at times, and staff who were present in the hall were highly impressed by the excellent quality of the acting.

She added that it would be an unforgettable ‘experience’.

“Witnessing Macbeth performed in such a close proximity by talented actors who actively engage with and question them as an audience was an invaluable and inspiring experience for our students,” she said. “They were totally new to the play, but were gripped by the narrative and dramatic interpretations, which were made accessible through clever pacing, translations and questioning. Interestingly, many pupils have since said they preferred to hear the scenes in the Shakespearean dialogue rather than the modern English as they felt it carried more power. So that’s an excellent way into Macbeth as they go on to study it for their GCSE Literature next year. We’ve also had pupils asking more about further education and careers in the arts, which is great to see.”

Head of English Maria Evans added her own comments about the ‘inspiring’ day.

“It was a very inspiring and uplifting event where the pupils were able to learn about Shakespeare’s themes, styles and techniques,” she said. “The workshop allowed the pupils to enhance their appreciation of the extraordinary range and richness of Macbeth.”

Mrs Evans continued: “Taking part in workshops such as this is important for our pupils to develop their interest in English. The Year 9 pupils were able to expand their critical interpretation skills whilst gaining more understanding of the important themes which run throughout Macbeth.”

Head Teacher Alex Hren was also impressed. “It was a day full of energy, enjoyment and exploration,” he said. “Events like these provide a very valuable experience for our students and enhance the learning curriculum. Thank you to UCEN and Greater Manchester Higher. It was a very successful event with some students complaining when the session was over – it certainly sparked their enthusiasm.”