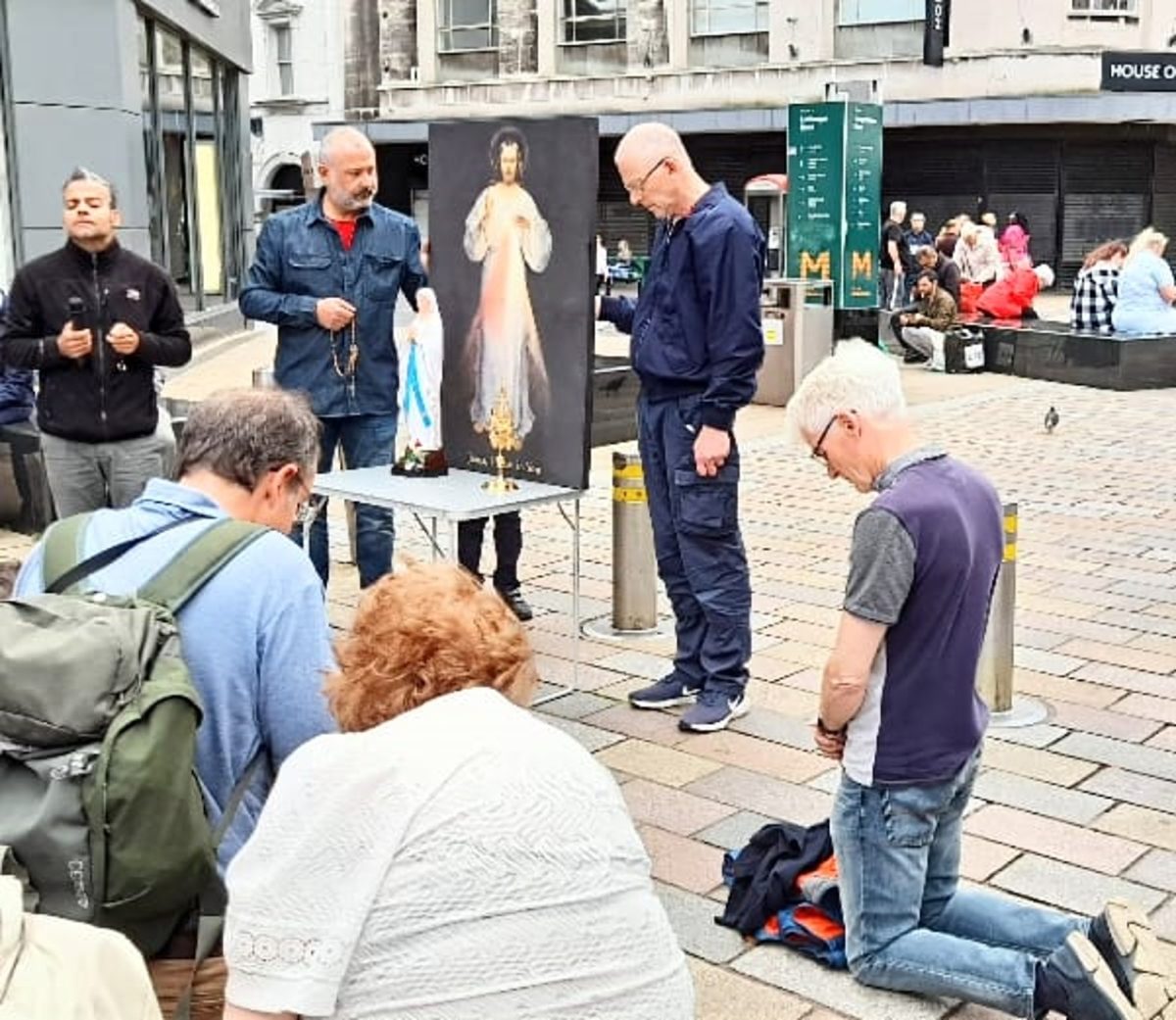 Middlesbrough streets are alive with the sound of praying

Catholic men gathered in Middlesbrough on Saturday 2nd July for a joyful rosary rally which prompted passers-by to film the event and enlivened the streets.

Organiser Ben Corbett was delighted with the turnout and a return to ‘public worship’ following the restrictions of covid lockdowns.

“The faithful seemed very enthused and heartened to see public worship return to the streets after what seems like a far too lengthy hiatus,” Mr Corbett told the Universe.

After prayers at St John’s Anglican church, the procession began with attendees carrying a statue of Our Lady, an image of the Divine Mercy and a first-class relic of St Faustina. Then the group gathered in the town centre for around 40 minutes, to pray the joyful mysteries of the rosary and the chaplet of the Divine Mercy. They then processed back to St John’s for a communal lunch in Centre Square.

Mr Corbett noted that many onlookers were ‘curious’ about the gathering.

“The reception from onlookers was remarkably accepting,” he said.

“Curious passers-by were seen filming the prayer, which will hopefully be shared on social media, and we had a number of people stop to watch and listen, and even some stop to stay and pray for with us for a time.”

Mr Corbett expressed hope that the event will embolden people to be brave in sharing their faith.

“There’s certainly a feeling that now is the time to begin boldly proclaiming our faith and bringing the Good News to the people again, standing tall and showing people that the Church is alive and bringing hope and salvation in an often lost and misguided world,” he said.

Paul Hammond from Washington said that the public nature of the rally helped strengthen his family’s faith.

“I took 3 of my sons to the rosary rally and we all felt strengthened and unified as a family and as part of a wider church community by praying and witnessing in public,” Mr Hammond told the Universe.

“An onlooker called Michael told me how pleased and uplifted he had been to see us. I gave him my rosary beads and his face lit up.”

Public rosary rallies have recently increased in popularity after taking place in Poland, Ireland and the USA, amongst other countries. The first of its kind in England took place in Manchester in February 2022, since when several similar events have taken place.

Mr Corbett said he hopes to hold a similar rally next year and ‘possibly arrange one for Easter 2023.’ He also said that a men’s event will take place on 10th September at St Joseph’s church in Middlesbrough.