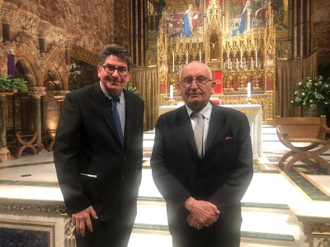 The talk was held in-person with many more watching via livestream. Lord Bird began his talk by reflecting on his last visit to Farm Street Church in 1963, following the assassination of John F Kennedy, when he deeply felt the loss of the man he saw as “the most powerful Catholic in the world.”

Lord Bird described how he was brought up in a large Irish family in the “slums” of west London. He spoke movingly of how his experience of being made homeless at the age of five had shaped his understanding of the causes that led people falling into need. It was the local Catholic church that stepped in to help the Bird family, providing care for him at a convent in Mill Hill.

His childhood home gives its name to the title he took on entering the House of Lords in 2015 as the Baron Bird of Notting Hill. “I got into the House of Lords by lying, cheating, and stealing”, he said – in reference to the fact that it was his time in a young offenders’ institute where he learned to read.

Lord Bird’s experience of being given money by Gordon and Anita Roddick to launch the Big Issue in 1991 has clearly shaped his view on giving. People need a “hand up, not a handout”, and he stressed that giving should always be helpful to the person on the receiving end. “When we give, we should not rob people of their dignity”, he said.

He noted that every party in power found itself moulded by the machinery of Government. He hoped that his presence in the House of Lords would force people to think differently.

He describes himself as being a devout Catholic in his teenage years before becoming a “devout Marxist” and returning to his faith again in later life. He spoke of his passion in promoting a “muscular Catholicism… committed to the wellbeing of the poorest.”

Catholic Union Chairman, Rob Flello, said: “We’re extremely grateful to Lord Bird for a very powerful and personal talk. His journey from working in the kitchens of the House of Lords to sitting on the red benches is truly remarkable. His talk was a stark reminder of the crushing nature of poverty, and the importance of giving in transforming lives.”