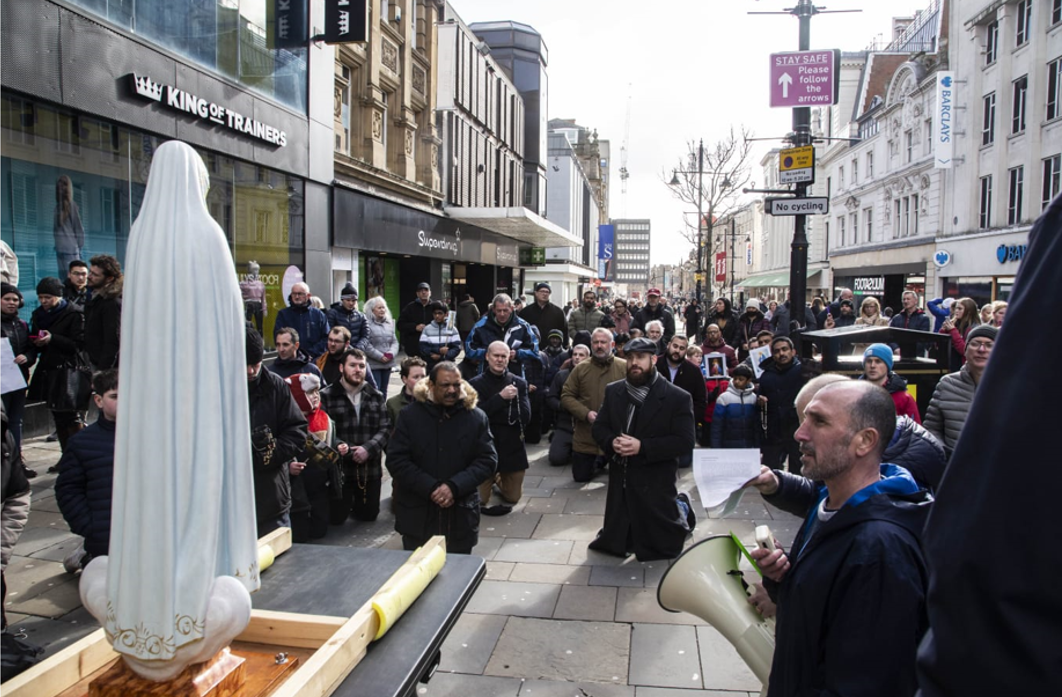 Brothers In Arms Gather In Newcastle For Rosary Rally

Football crowds and shoppers looked on as a group of Catholic men marched to Newcastle city centre for a ‘powerful’ rosary rally.

More than 50 men and boys prayed the rosary together on Saturday 5th March in Northumberland Street-right in the centre of Newcastle. The rally was part of a wider day of recollection for men, featuring talks and fellowship, exploring the nature of manhood in the context of marriages, families, workplaces, church and society.

Organiser Paul Hammond called the day an ‘amazing’ experience. “It was powerful witnessing on the streets,” he told the Universe. “The talks and testimonies were amazing.”

Rosary rallies around the world have become increasingly popular, in Ireland, USA, the Ukraine and, more recently, in Manchester. Mr Hammond commented how the distinctive group, carrying statues, rosary beads and religious images, attracted the attention of the Newcastle public.

“It was a busy day, a match day. We were surrounded by onlookers taking photos and videos or just looking out of curiosity,” he said.

“Others came up and joined us in prayer. Afterwards, conversations were had with some non-Christians, who had clearly been touched.”

He also spoke of ‘an overriding sense of unity, strength and power’ as he explained the format of the rally. “We sang hymns boldly whilst processing behind a statue of Our Lady, then knelt together on the high street for the angelus, rosary and divine mercy chaplet,” he said.

Mr Hammond said he had received positive feedback from those attending the day. One message described it as ‘an absolutely brilliant day. The sun was on our side while on Northumberland street. The occasion was one of peace, and the Holy Spirit was with us throughout the day.’

The Men of St Joseph group, based in Gateshead, were supported by a similar group in Stockport in organising the event.

Jonathan Yates, an architect from Durham, pinpointed the procession from a church to Northumberland Street as a real highlight. He also spoke about the importance of unity, quoting from the song Brothers In Arms by one of Newcastle’s most popular groups, Dire Straits.

“I was asked to give a short testimony,” he said. “Brothers In Arms, the Dire Straits song- I couldn’t get it out of my head, as a brother from Dallas had shared the lyrics that morning. I spoke of still being afraid, and a bit of a coward yet, when I looked out at the faces of my brothers in arms looking back, my fears were scattered. I saw us as an army, a band of brothers.”

The Stockport group added their support via input from regulars Simon Leigh and Sean Booth, whilst Gary Stephens, leader of the New Dawn family conference in Walsingham, spoke about gifts and the Church.

Pope: ‘Rivers of blood’ flowing in Ukraine and Vatican ready to help
Previous Post
Prayer is a mission to bring hurting world to God, pope says