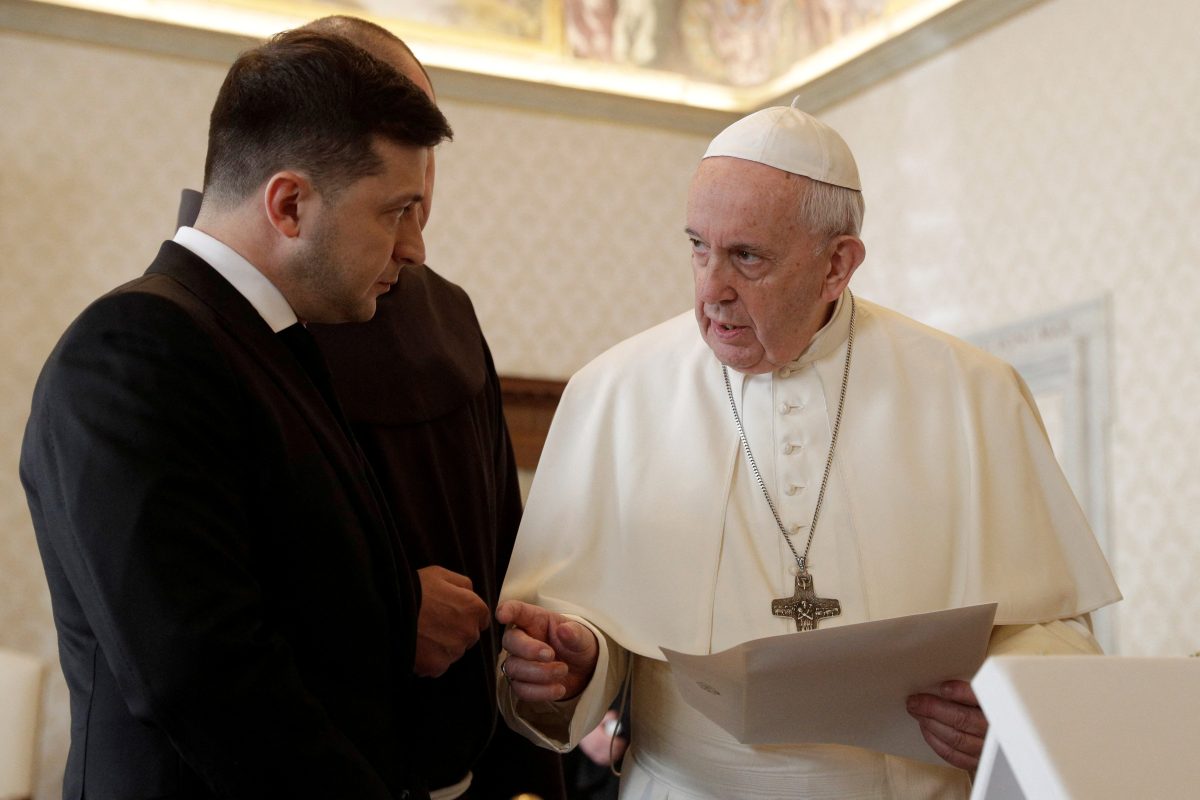 Andrii Yurash, Ukrainian ambassador to the Holy See, tweeted that the conversation between the pope and president was “very promising.” The ambassador reported the pope was “praying and doing everything possible” to help end the war and that the pope was again invited to visit the country.

Matteo Bruni, head of the Vatican press office, confirmed to reporters that the call between the pope and President Zelenskyy had taken place, but he provided no details.

In the Ukrainian leader’s 12-minute speech to the Italian parliament later the same day, he emphasised the need for increased sanctions against Russia and its leaders and pleaded for military and humanitarian support.

He introduced his talk by mentioning that “today I spoke with his holiness Pope Francis and he said many important things.”

From his Twitter account, @ZelenskyyUa, the president said he told the pope about “the difficult humanitarian situation and the blocking of rescue corridors by Russian troops.”

“The mediating role of the Holy See in ending human suffering would be appreciated,” he wrote, adding that he thanked the pope “for the prayers for Ukraine and peace.”

The pope and president also spoke by phone on 26th February, two days after the Russian invasion began.

In his address to the Italian parliament, he said he told the pope that the Ukrainian people “have become the army” after witnessing the damage “the enemy brings, how much devastation it leaves, how much bloodshed.”

He urged the Italian parliament and the rest of Europe to impose more sanctions on Russia and “pressure” it to seek peace instead of seeking mercenaries from Syria and Libya.

“It is necessary to do what is possible to guarantee peace and stop a war organised for years by one single person. You know Ukrainians well, a people who never wanted war; they are Europeans like you. You know well who brought about the war, who is ordering the fight,” Zelenskyy said, referring to Russian President Vladimir Putin.

He said Ukraine is the gateway into Europe for the Russian military and that Europe “has to stop just one person so that millions may survive.”

Picture: Pope Francis meets Ukrainian President Volodymyr Zelenskyy during a private audience at the Vatican. The pope and Zelenskyy spoke on the phone on 22nd March 2022, before the president addressed the Italian parliament virtually. (CNS photo/Gregorio Borgia, Reuters pool)