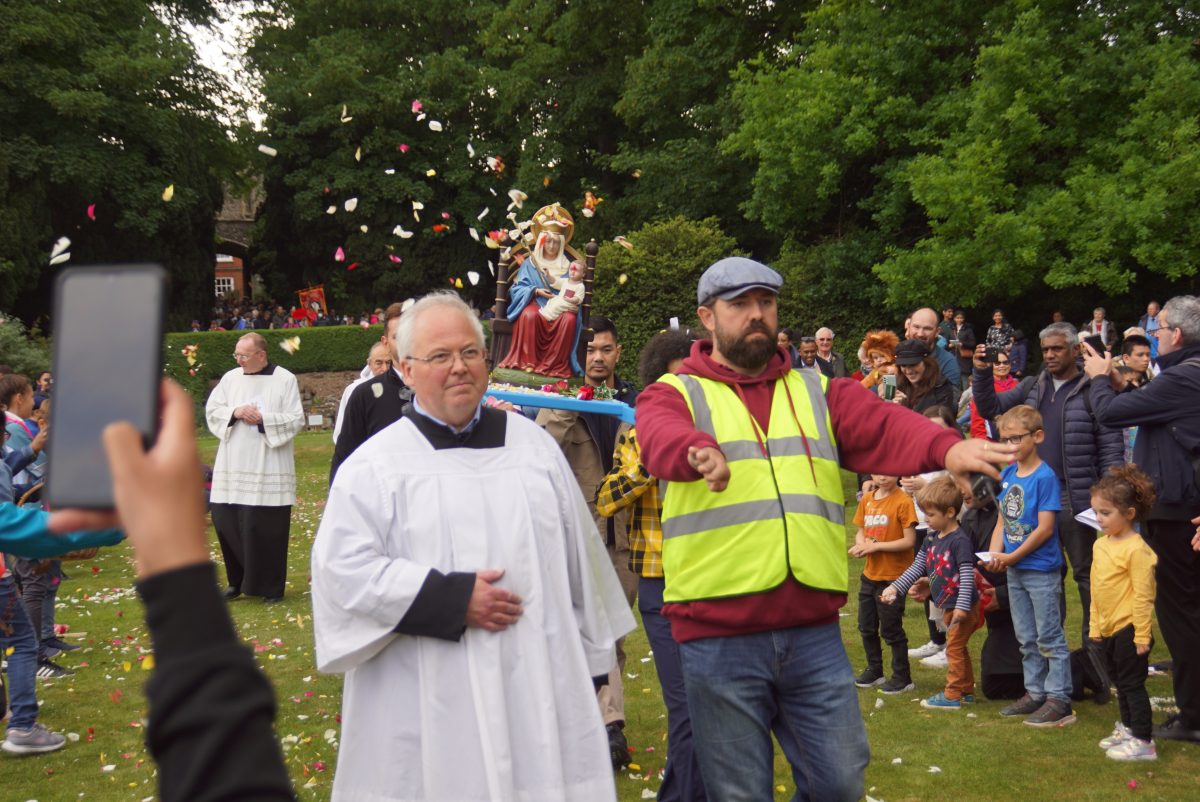 For this first time this year, the diocese of East Anglia’s children’s pilgrimage to Walsingham was combined with the diocesan pilgrimage, creating an event in which extended families could take part.

The pilgrimage began with Mass at noon at the Catholic National Shrine. Bishop Alan Hopes welcomed children and adults, and after the opening prayer invited the children to follow some of their peers to the Liturgy of the Word being held for them in a new marquee. They duly filled the whole space.

Fr Pat Cleary gave a children’s homily on the Gospel of the Visitation, speaking about Mary visiting the cousin she loved when they were both expecting children. He described how we like to visit those we love, especially if they are unwell, as we want to share news with them and also just want to see them.

The leaders then showed the children a heart and invited them to write names of loved ones who they would like to visit or pray for on heart-shaped post-it notes. “The proof that the children had received this message lay in their enthusiasm for the activity and the lovely thoughts written,” writes Chris Storman, who organised the children’s pilgrimage. “Grandparents are clearly very popular- especially those living in Belize or India, but nearer home also.” At the Offertory, the children gave Bishop Alan the board of post-it notes plus one in the colours of the Ukrainian flag and a prayer for peace.

Hamish and Harmony McQueen, with Kerry Barret, provided music during and after lunch, and the children sang and danced along, creating a lovely atmosphere in the picnic area.

In previous years, participants had gathered in the Friday Market Place outside the Church of the Annunciation in Little Walsingham and then processed along the railway track path to the Catholic National Shrine, stopping for prayers said by young people. This year, to unite with the Diocesan Pilgrimage, the Children’s Pilgrimage went in the reverse direction, beginning at the National Catholic Shrine and processing into Little Walsingham to the Abbey ruins.

To create a safer experience for the children, the route followed the disused railway track, while the adults processed along the parallel Holy Mile which follows the road.

Bishop Alan spoke to the children as they set off. The walk was joyous, with stops for prayers and hymns. At the Abbey, the children, armed with petals, formed a guard of honour to greet the statue of Our Lady. As the statue passed, they strewed beautifully, forming a colourful carpet.

After Benediction and the blessing at the site of the Holy House, families returned home happy and dry, having escaped the rain happening over most of the county.

The Children’s Pilgrimage began when small groups from Thetford and Yarmouth met up at Walsingham. Other parishes said they would like to join in, and it has grown from there.