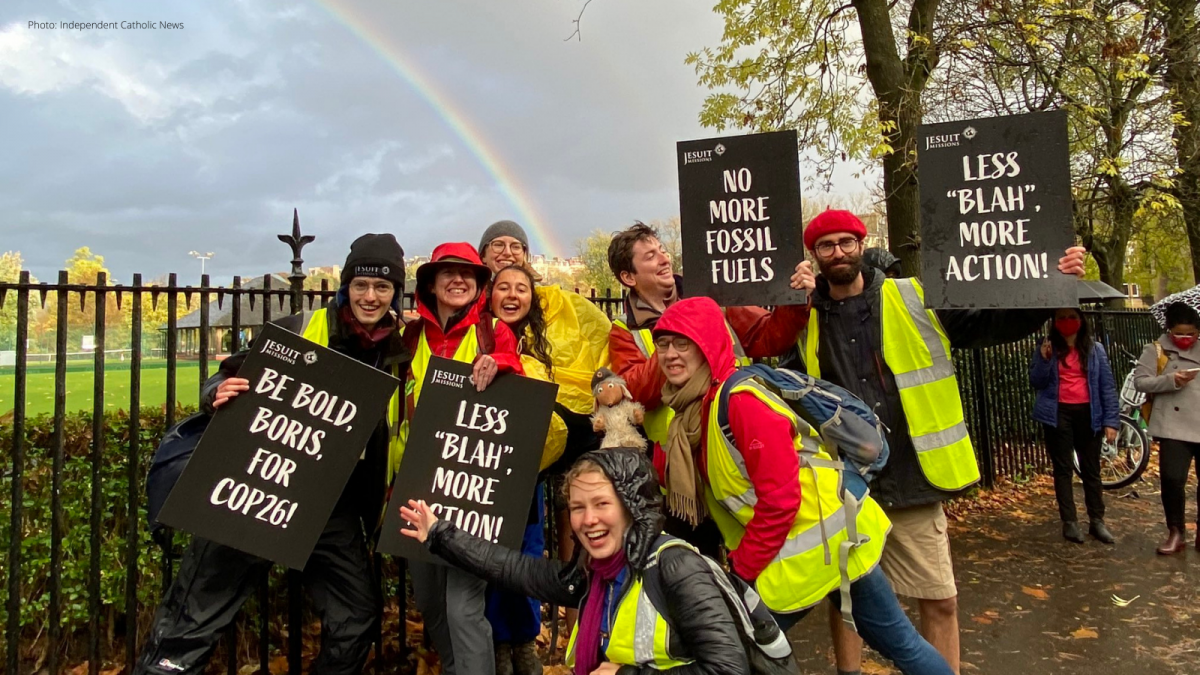 Was Glasgow left on fire or full of smoke? Jesuit Missions reflects on COP26.

Zoë Carruthers, Communications and Campaigns Officer for Jesuit Missions, explores the highs and lows of the two-week climate change conference.

The Jesuit Missions team was gearing up for COP26 for quite some time. From awareness raising campaigns to visiting 10 Downing Street with our COP26 petition, we were keen to let the politicians know our stance on climate change. That is, to take more action to minimise it.

For Jesuit Missions, ecology has always been an integral part of supporting communities overseas. Agricultural projects, reforestation programmes and emergency relief after natural disasters; these are just some examples of projects we support which are directly related to the natural environment. If that wasn’t a good enough reason to be engaged at COP26, we are of course motivated by the words in Pope Francis’s Encyclical, Laudato Si’.

He says, “Today, however, we have to realise that a true ecological approach always becomes a social approach; it must integrate questions of justice in debates on the environment, so as to hear both the cry of the earth and the cry of the poor.”

So, with heads full of plans and hearts full of expectations a bunch of our team clambered on the (delayed) train to Glasgow. We had various team members dedicating themselves to different areas. Director Paul Chitnis attended the COP26 delegates area with International Programmes Officer, Lucy Gillingham. They were able to give live updates and meet with other faith-based organisations who had united goals.

Paul and Lucy were able to witness first-hand the agreements being made by world leaders throughout the conference. This includes India’s announcement to be net zero by 2070, ending deforestation by 2030 and reducing Methane emissions by 30% from 2020.

While these all seem like big steps in the right direction, there are questions about the credibility of these agreements. Paul says, “Too many decisions have been kicked down the road to future years and successor COPs. Put simply, the political will has been lacking.” However, spiritual will was not lacking in Glasgow…

Colm Fahy, an intern at Jesuit Missions was leading the spiritual aspect of our work at COP26, by leading the COP26 pilgrimage from Edinburgh to Glasgow. In total, 28 pilgrims took part and they were our spark of joy and hope during the lack-lustre negotiations.

Our pilgrims reflected on the climate crisis while walking in the rain, they prayed for those affected by climate change while marching in the sunshine, they sang spontaneous hymns to God, praising him for creation. The pilgrims’ faith in God has helped us to look to a higher place for hope, rather than trying to find it in the empty words of world leaders.

The Jesuit Missions team and the pilgrims came together on Saturday 6 November, in between week one and week two of the conferences. Provincial of the Jesuits in Britain, Fr Damian Howard SJ spoke right before we joined the Global Day of Action for Climate Justice March. He said “Even the climate crisis is in some deep, mysterious way a gift… God sometimes creates gifts that we find difficult or even painful, and sometimes those gifts are a way for God’s glory to shine through our human weakness. Let’s not be too worried about the things that are going wrong, because we trust, we hope that this difficult gift will be a way God shines through our human weakness.”

It would be wrong to say we are happy with the outcomes of COP26. However, we choose to continue hoping and advocating for the protection of our common home.