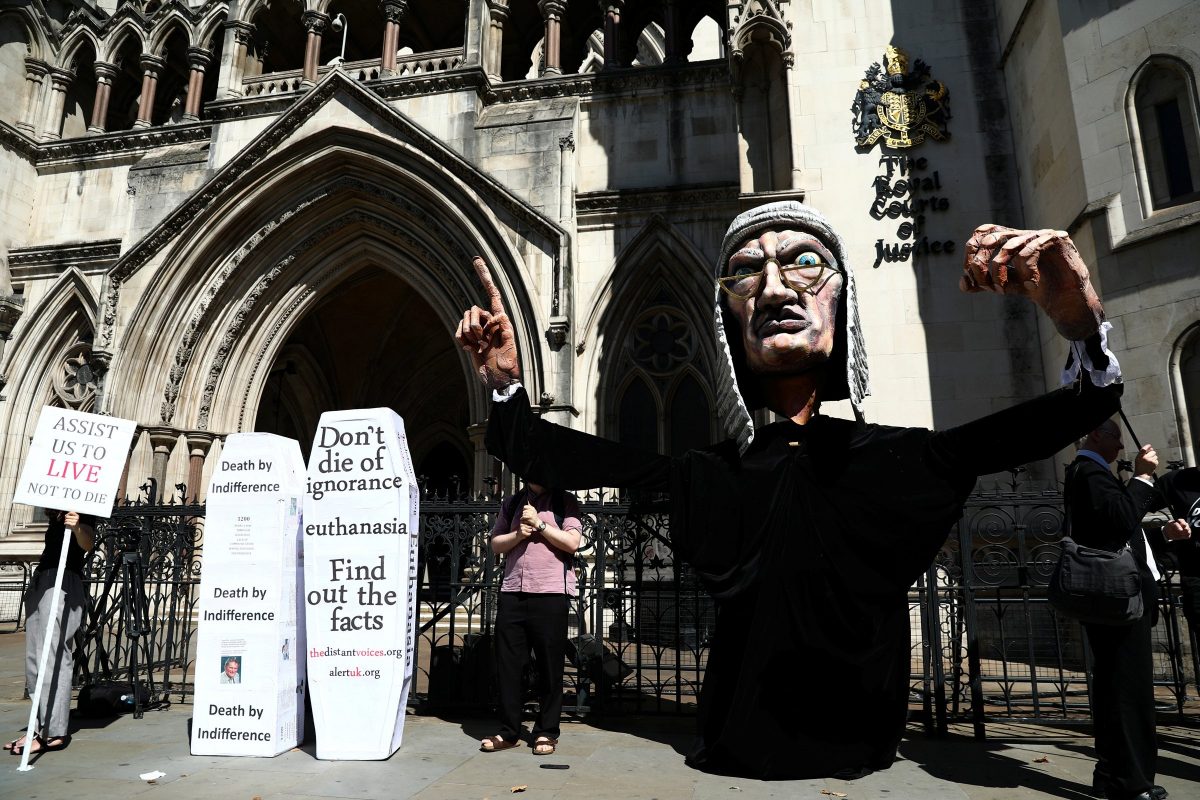 Campaigners in favour of assisted suicide appear to have adopted the proverb ‘if at first you don’t succeed, try try again, persistence pays off in the end’ as one of their key values.

The sentiment, first coined by American educator Thomas H Palmer, is certainly a noble one in most circumstances, but in this case there is nothing admirable or virtuous about the state-sanctioned killing of the sick proposed by said campaigners, no matter how much they attempt to dress it up in the language of compassion.

For reasons best known to themselves, the assisted suicide lobby has decided that the aftermath of the Covid-19 pandemic is the perfect time for the Parliamentarians to grapple with whether or not to allow medical professionals to bump off ailing patients, and so on 22nd October, a bill by Baroness Meacher will have its second reading in the House of Lords.

This is the fourth attempt at legalising euthanasia since 2006; the last failed bill was overwhelmingly rejected by MPs in 2015, but with the NHS and public finances under so much strain, campaigners obviously feel that they stand a much better chance of success. A slick PR campaign has already swung into motion with various sympathetic opinion pieces appearing in various newspapers, with accompanying debates on the nation’s talk shows and social media. As is so often the case in the culture wars, religion is either co-opted and willfully misconstrued in order to support the notion of killing in the name of compassion or deemed irrelevant, with those who stubbornly adhere to the Fifth Commandment denounced as uncaring bigots who wish to impose terrible suffering upon others for the sake of their religion.

Campaigners present euthanasia as the only humane solution to a terrible death and terrify the media and general public, painting stories of unimaginable torturous suffering that patients will be subject to if the law is not changed.

It is irresponsible scaremongering that plays on everyone’s worst fears.

I’m not going to pretend that every single death from illness is ideal — too many patients do not experience the death which we all deserve, there are still far too many instances where care falls short or where, scandalously, patients are put on a rebranded version of the infamous Liverpool Care Pathway, but the answer to this must be to continue to demand improvements in palliative care.

The United Kingdom, pioneer of the hospice movement, is still a world leader in palliative care but unless we have direct experience either in that field or in dealing with the bereaved, we don’t actually get to hear about those very many cases where a person makes a peaceful departure from this life. My husband, who ministers to both the dying and the bereaved on a regular basis, tells me that in his experience, patients quietly slipping away is the norm.

Like abortion, the other major life issue, a vote for euthanasia is a vote for nihilism and despair and very far from the Christian values of hope, perserverance and triumph over adversity. The introduction of legalised medical killing would do nothing to improve care services for the terminally ill, but would become part of the gamut of ‘treatments’ on offer to patients faced with a difficult diagnosis.

The slippery slope argument has become a modern cliche. However, it’s worth remembering, that 54 years ago when abortion was debated in the House of Commons, the voices of those who claimed that legalisation would lead to abortion on demand were drowned out with howls of derision and scolded for fearmongering. The legalisation of abortion, it was claimed, was required in the name of compassion and would only ever be used in the hardest of cases. The idea that women who presented to their doctor with an unplanned pregnancy would automatically be offered an abortion, or that abortion would become a commonplace occurence, was unthinkable.

In a post-Christian society, people tend to believe that because the law sanctions a certain idea it must therefore be moral. Doctors are still one of the few vocations that inspire trust and therefore, if a doctor presents assisted suicide as a potential option, then most people will believe that it is worth considering or a even a good thing. Even the most strong-minded of patients will feel under pressure or a responsibility to seriously consider ending their lives, if nothing else for fear of being a burden upon others or on state resources. It is after all, much cheaper to kill someone than provide them with medical care over a period of months and years, and with more patients choosing to end their lives, there will be much less incentive to pour resources into the provision of good palliative care.

Perhaps this is why in a recent poll by the British Medical Association, over 76 per cent of palliative medical care specialists opposed the legalisation of assisted suicide.

In Oregon in the US, the model cited by campaigners, over 50 per cent of those helped to die by medical professionals cited not being a burden on others as a reason for choosing death.

Experience from other countries who have gone down this dark and terrible path shows that campaigners are continually pushing the envelope when it comes to the alleged safeguards. As with abortion, euthanasia would not be restricted to the hardest of cases, but deemed an inalieable human right which ought to be available to anyone who requests it for whatever reason. Why restrict it to those with only a narrow window of life left? Why shouldn’t it apply to anyone who has a chronic long term condition or disability that causes them distress? What about the mentally fragile who are tired of life? Why can’t they be allowed a clean and efficient way to end their lives, as currently happens in Holland?

The other, crucial, thing that campaigners do not want to talk about is that the idea of a quick and painless death via a lethal cocktail of drugs is very far from guaranteed.  No drug or protocol used in assisted suicide has undergone medical trials and they often involve highly distressing complications. Doctors would in effect be experimenting on their patients.

Returning to the alleged Utopia of Oregon, 79 per cent of the lethal drugs used in assisted suicides are the same dangerous barbiturates used in administration of the death penalty, in which condemnees experience deaths described as cruel and unusual. Assisted deaths using these drugs have taken over 30 hours to occur and frequently involved vomiting, regaining consciousness, asphyxia and convulsions. Baroness Meacher’s bill does not propose which drugs would be used, leaving the specifics and finer details to be sorted out  by the Health Secretary at a later date.

While the bill still has some way to go before it becomes law, if passed it will set a precedent from which there will be no going back. For the first time in history, medical professionals will be given the power to determine that it is in a person’s best interests to die.

A civilised and truly compassionate society cannot let this happen.