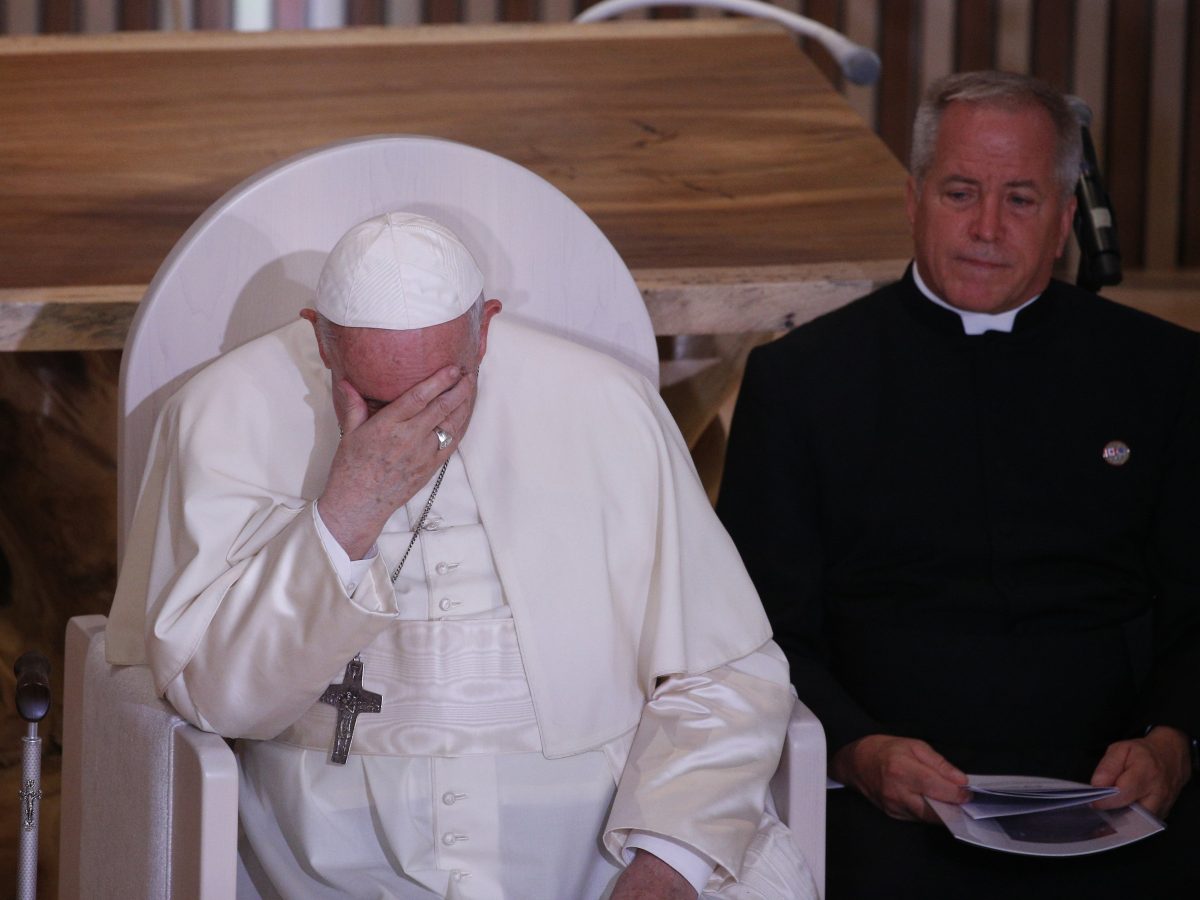 “I am sorry,” Francis said, to applause from school survivors and Indigenous community members gathered at a former residential school south of Edmonton, Alberta, the first event of Francis’ weeklong “penitential pilgrimage” to Canada.

He said the forced assimilation of native peoples into Christian society destroyed their cultures, severed their families and marginalised generations in ways still being felt today.

While presented as missionary work, the operation of residential schools by Catholics in Canada was actually an attempt to impose European culture on Canada’s Indigenous people, Pope Francis said.

“One cannot proclaim God in a way contrary to God himself,” the pope said on 25th July  at Edmonton’s Sacred Heart Church of the First Peoples.

Several of the First Nation, Inuit and Métis parishioners of Sacred Heart and many of their parents and grandparents were forced by the Canadian government to attend residential schools, which were set up to force the Indigenous to adopt European languages, culture and forms of Christianity.

“If we think of the lasting pain experienced in these places by so many people,” the pope said, “we feel nothing but anger and shame.”

“Nothing can ever take away the violation of dignity, the experience of evil, the betrayal of trust,” suffered by the students, he said. And nothing can “take away our own shame as believers.”

At Sacred Heart, the pope expressed admiration for the many survivors who did not lose their faith and who still go to church.

“I can only imagine the effort it must take for those who have suffered so greatly, because of men and women who should have set an example of Christian living, even to think about reconciliation,” he said.

About 250 people filled the church for the pope’s visit and for prayer and music before he arrived.

The church, Pope Francis said, must be a place of reconciliation, a place where all are welcome as they are and where discrimination has no place.

“Joined to the earth by its roots, a tree gives oxygen through its leaves and nourishes us by its fruit,” he said. At Sacred Heart, “a tree trunk symbolically unites the earth below and the altar on which Jesus reconciles us in the Eucharist in ‘an act of cosmic love’ that ‘joins heaven and earth, embracing and penetrating all creation,'” he said, quoting his encyclical on the environment.

The way forward, Pope Francis said, is “to look together to Christ, to love betrayed and crucified for our sake; to look to Christ, crucified in the many students of the residential schools.”

On “the tree of the cross,” he said, “sorrow is transformed into love, death into life, disappointment into hope, abandonment into fellowship (and) distance into unity.”

One of the hosts of the event, Chief Randy Ermineskin of the Ermineskin Cree Nation, said some had chosen to stay away — and that that was understandable. But he said it was nevertheless a historic, important day for his people.

Prime Minister Justin Trudeau, who last year voiced an apology for the “incredibly harmful government policy” in organising the residential school system, was also attending, along with the governor general and other officials.

The morning after he arrived in the country, Francis travelled to the lands of four Cree nations to pray at a cemetery.

Four chiefs then escorted the pontiff in his wheelchair to powwow ceremonial grounds where he delivered the long-sought apology and was given a feathered headdress.

“I humbly beg forgiveness for the evil committed by so many Christians against the Indigenous peoples,” Francis said near the site of the former Ermineskin Indian Residential School, now largely torn down.