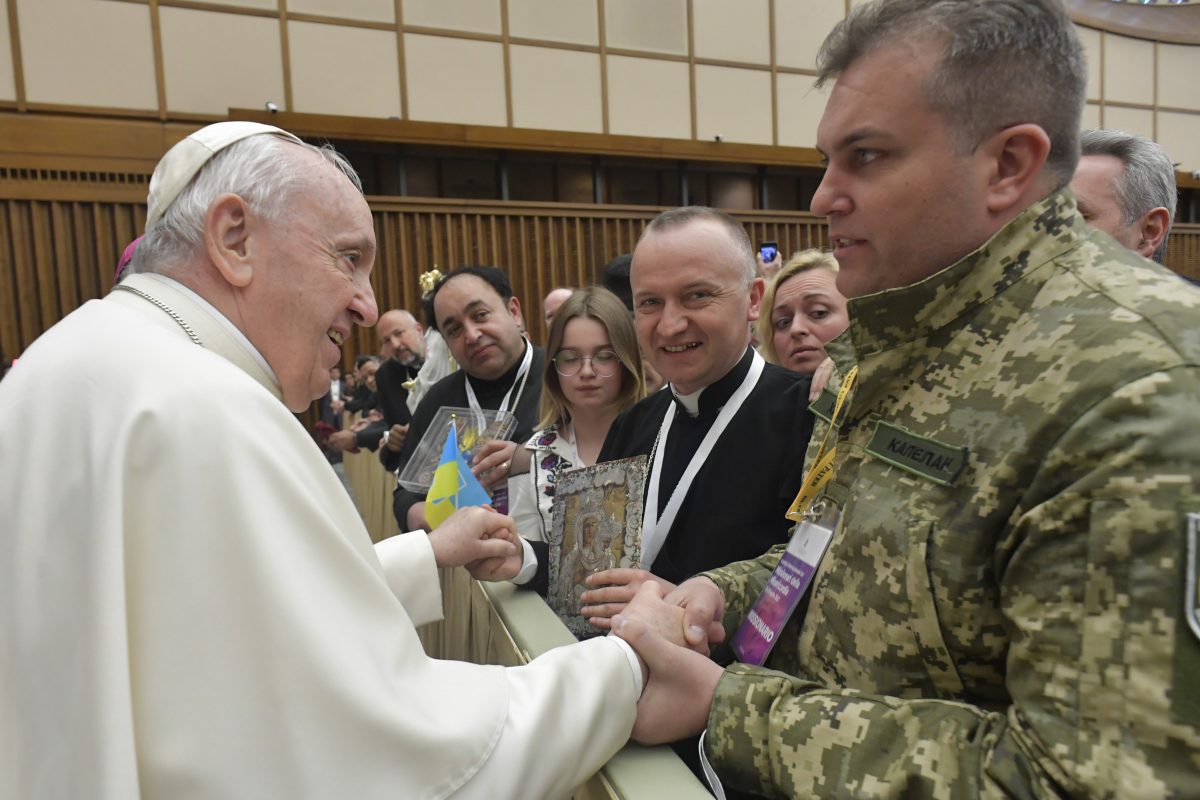 ‘Smell of sheep’ in Ukraine reeks of scorched homes and death, chaplain says

Having “the smell of sheep” for one military chaplain serving in Ukraine has now meant being surrounded by the smell of burned homes and lives.

“Every city has its own smell of suffering. It can’t be described. The church here must become saturated with this smell and stay close by with different ways of helping,” said Father Oleksandr Khalayim.

“The real church is a flexible church” that can be wherever it is needed, he said in an interview with Vatican News on 26th April.

Father Khalayim, a military chaplain and a missionary of mercy, is a priest of the Diocese of Kamyanets-Podilskyi in the southwest of the country near the border with Moldova and Romania.

The priest was in Rome for the World Meeting of Missionaries of Mercy between April 23-25, sponsored by the Pontifical Council for Promoting New Evangelization.

Asked how he brings mercy and forgiveness as a chaplain to a war zone, Father Khalayim told Vatican News that “there must be dialogue before forgiveness. Forgiveness must be accepted, and it is a long journey” that may take “three or four generations.”

“For me, right now it is hard to talk about forgiveness if bombs keep coming, if children are still being killed, if our cities are still being bombed,” he said. “To forgive what women and children have suffered through is truly difficult.”

“Yes, we Christians must talk about forgiveness, but we cannot exploit this word, because forgiveness comes with responsibility. God forgave not just with words, but with his heart. It will be necessary to have a long period of care for the heart,” said the priest, who had been serving as spiritual director at the major seminary in Horodok, near Lviv.

As a missionary of mercy, he said when he speaks with soldiers, he explains that mercy means asking them not to kill if it is possible. But that is not easy for those on the frontlines who are defending their country.

“Even this is mercy-to defend your home and family,” he said.

When the war broke out, he said he thought about how he could help, and he chose to be close to the people-soldiers, volunteers and especially the elderly, “so no one feels alone.”

Father Khalayim spoke about Pope Francis’ mandate “that priests must have the smell of sheep,” that is, of their people. “And now the church in Ukraine has this smell — the smell of burning, the smell of war” and “the smell of death.”

In Bucha and Gostomel, there is “the stench of things scorched” and in Chernihiv it smells like “abandonment with everything destroyed” and people left on their own and helpless, he said.

“One person couldn’t move for five days, no one could help. The only thing she could do was get water from the home heating radiator to drink. That’s how she survived,” he said.

In addition to all the solidarity and assistance Ukraine has been receiving, he said, the country also needs people who will seek out the truth.

“The enemy hides behind many lies and propaganda. The truth cries out-there is no need to be afraid to tell the truth,” he said, even though it may come at a cost, either by losing material security or one’s own life.

Father Khalayim was one of nearly 400 missionaries who met with Pope Francis at an audience at the Vatican on 25th April.

The pope commissioned the priests during the 2015-2016 Year of Mercy for the special mission of preaching God’s mercy, and especially to encourage Catholics to rediscover the grace of the sacrament of reconciliation.