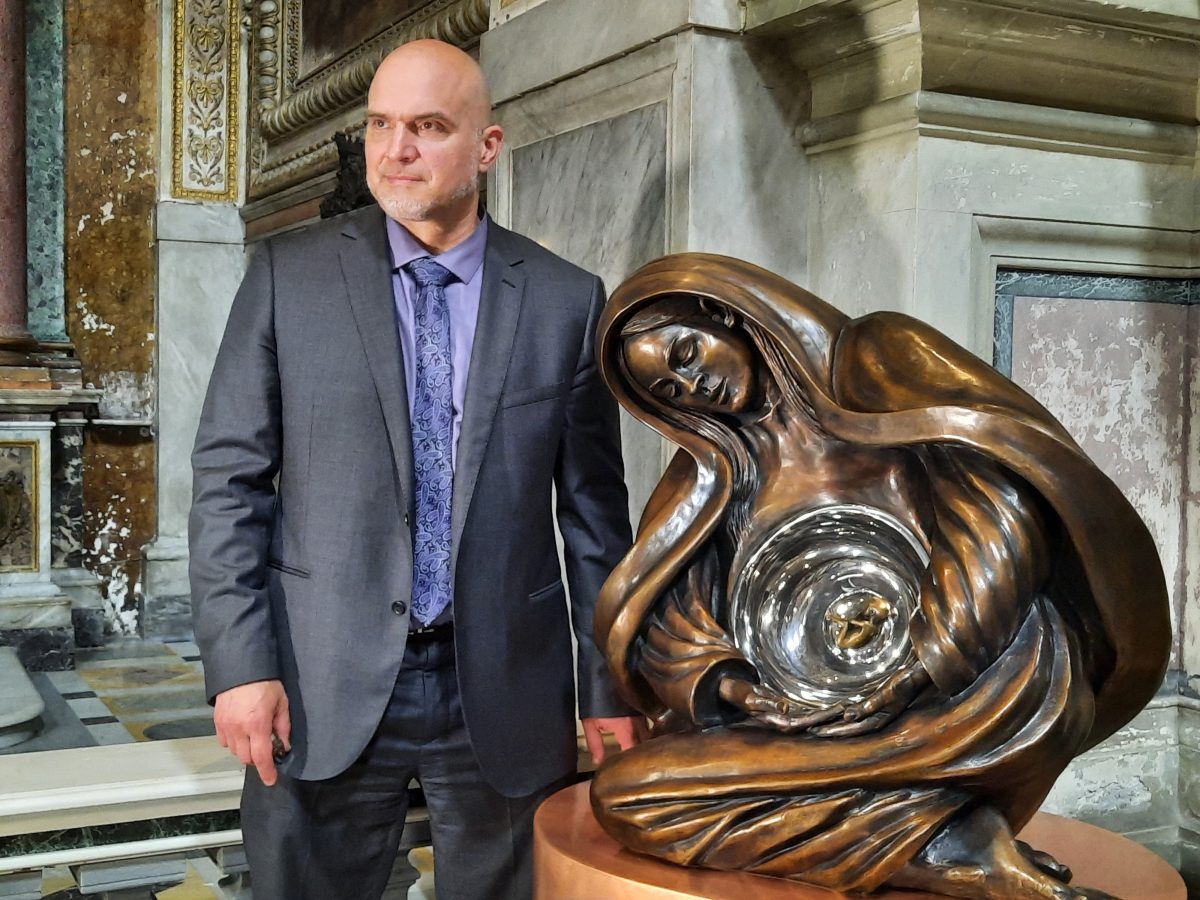 If “beauty will save the world,” as Russian novelist Fyodor Dostoevsky said, then “perhaps beauty can also save the unborn,” said Canadian artist Timothy Schmalz.

“Artwork has the power to persuade and convince and move people,” and “the more representations we have of a mother and child … in our visual landscape,” the better, he said.

Schmalz spoke with Catholic News Service and other reporters in Rome on 27th May to present his latest sculpture: the “Life Monument,” which is permanently installed at the Church of San Marcello al Corso in the center of the city.

The 8-foot-tall bronze statue depicts Mary embracing her pregnant belly, which reveals a womb made of polished stainless steel with the unborn baby Jesus. The mirroring effect of the womb allows viewers to see themselves in the womb, as a reminder that their lives, too, started in a womb, he said.

Schmalz said his hope is to offer a pro-life message that reminds people of their own gift of life and the beauty of art to touch the hearts of those who are in favor of legalised abortion.

“I just do not want to preach to the choir,” noting how the church where the statue is displayed is visited by countless tourists.

He said he wanted the piece not to be “a weapon of confrontation,” but seen as “a celebration.”

“I did not want to make a pro-life sculpture that offends anyone,” because the method of using horrifying images of dead unborn babies “is not working” and those who need convincing “are not going to learn anything,” he said.

If they can see the beauty in unborn life, he said, “perhaps that will be some sort of persuasion” to make them think more deeply about all human life as being beautiful.

When it comes to “touchy” hot-button issues, he said: “You have to use beauty and love or it’s just not going to work.”

“If I can move that dialogue one step closer to some understanding and love on both sides, then the sculpture is a great tool, it’s a great instrument,” he said.

A “colossal” version of the life-size statue in Rome is now on tour in the United States, starting in Texas, and will end up at its permanent home in Washington, D.C., outside the Theological College of the Catholic University of America, right across the street from the Basilica of the National Shrine of the Immaculate Conception.

Schmalz said he hopes to have copies of the Life Monument permanently installed in other countries, too.

He said he has plans to unveil a new piece highlighting the value of the elderly as part of an expanding series of pro-life pieces, which includes his “Homeless Jesus” sleeping on a park bench and “Angels Unawares,” depicting a group of migrants and refugees on a boat.

The Catholic Church needs to rediscover the value and impact of “the power of the visual,” he said.

In the past, the visual arts were instrumental in teaching the faith to a largely illiterate society, he said. But today, the problem is not that people cannot read, it is that they have no time to read.

People “need visual bites,” he said, and if the Catholic Church can continue “to put these positive messages that are relevant today out there, then they’re evangelising silently, subtly.”

Picture: Canadian sculptor Timothy Schmalz poses before speaking to reporters in Rome on 27th May 2022, to present the installation of his latest piece, “Life Monument,” a bronze and steel sculpture of Mary and the unborn Jesus in her womb. CNS photo/Carol Glatz