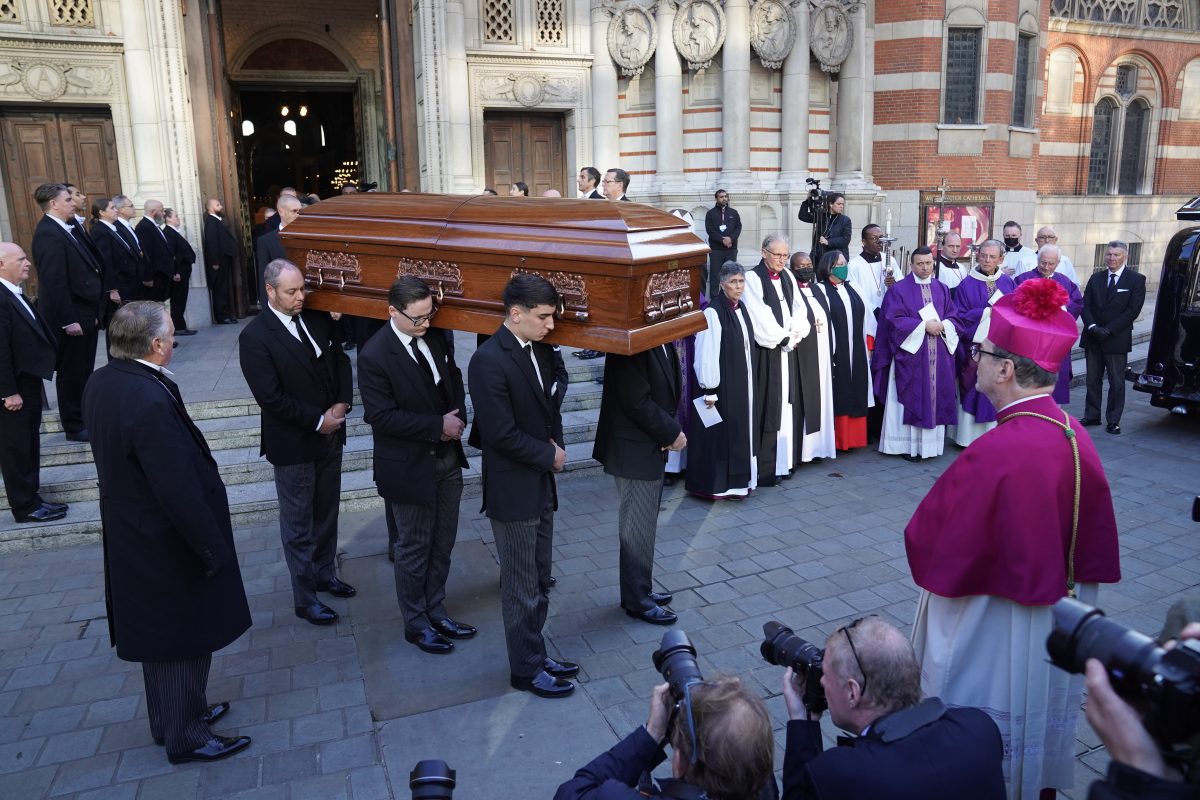 Moving tributes were paid to Sir David Amess MP during his funeral Mass at Westminster Cathedral. A message from Pope Francis was read out and a heartfelt and humorous tribute was given by Ann Widdecombe.

In a message delivered by papal nuncio Cardinal Pietro Parolin, Pope Francis referred to Sir David’s public Catholic faith. “His Holiness recalls with gratitude Sir David’s years of devoted public service guided by his strong Catholic faith”, he said. He also noted Sir David’s  ‘commitment to the defence of God’s gift of life and his efforts to foster understanding and cooperation with the Holy See in its universal mission.’

The message was heard by the Amess family and many members and former members of both Houses of Parliament, including prime minister Boris Johnson, Sir John Major, Theresa May and  David Cameron. Current cabinet members Rishi Sunak, Priti Patel, Dominic Raab, as well as Speaker of the House Sir Lindsay Hoyle and parliamentary colleague Lord David Alton, were also in attendance.  Lord Alton told the Universe Catholic Weekly that the funeral was ‘a powerful and moving occasion which will have given great comfort to his family.’

Ann Widdecombe said that Sir David ‘kept the faith’ and described him as ‘an ardent pro-lifer and campaigner against abortion.’  She recounted how he was given to practical jokes and once impersonated a fellow MP. During his homily, Canon Pat Browne, the Roman Catholic Priest for Parliament, recalled how Sir David met the pope and, realising he had forgotten his rosary beads, pulled out a boiled sweet which was duly blessed by Pope Benedict. The sweet then took pride of place in his parliamentary office. Laughter was heard when Canon Browne told the story of Sir David posing in a knight’s costume to mark his knighthood

The funeral was led by Cardinal Vincent Nichols, Archbishop of Westminster. Also present were His Excellency Archbishop Claudio Gugerotti, Apostolic Nuncio to Great Britain,. House of Commons doorkeepers provided a guard of honour. Westminster Cathedral Choristers and choirs from Southend, including the Leigh Orpheus and the Music Man Project, provided musical accompaniment.

When asked what Sir David meant to her personally, Ann Widdecombe was quick to point to his faith and its impact. “David, of course, was a practising Catholic. He led the All [Party] Parliamentary Group to the Holy See, met the Pope several times,” she said. “This is a Mass today – we are commending his soul to almighty God, but also today is a time to remember what he did for people.” She added that she thought Sir David was “probably the most important person in Britain” to the Pope.

Boris Johnson made a point of paying his own tribute. Writing in a Twitter message posted after the service drew to a close, he said: “Today we mourn the death of Sir David Amess, a beloved colleague, public servant and friend, and pay tribute to his immense contribution to politics, to the people of Southend and to this country.”

Leader of the Opposition Sir Keir Starmer also attended. He tweeted: “His lifetime of public service was marked by members of all parties as we came together to mourn his death and celebrate his life. May he rest in peace.”

Ann Widdecombe said the death of Sir David Amess still has ‘a great air of unreality about it’ and called on people to focus on how he lived rather than how he died. “Obviously I am feeling sad but, on the other hand, today is a great occasion to see so many people come to pay their respects to David, to celebrate his life,” she said. “What I am saying to everybody today is, look, the death was horrible, but I don’t want David to be remembered how he died, I want him to be remembered for how he lived and for the causes he fought for.”