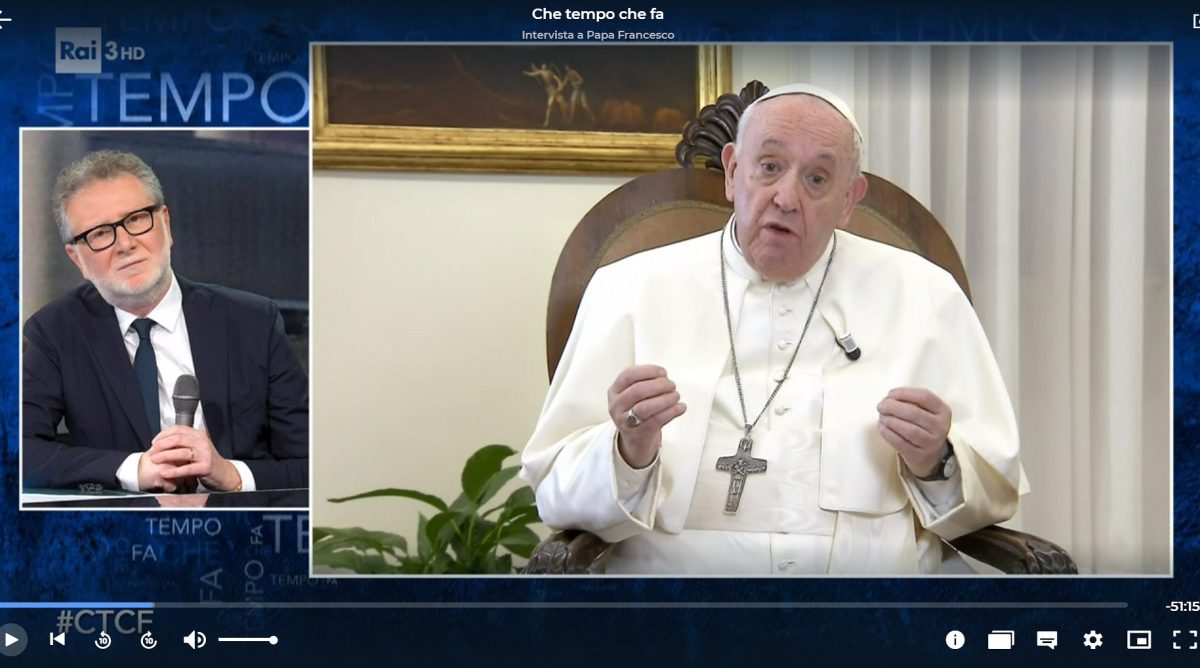 Pope Francis told an Italian interviewer that forgiveness is “a human right.”

“I’m going to say something that may shock some people, but it’s the truth: The ability to be forgiven is a human right,” the pope told journalist Fabio Fazio on 6th February during the primetime Italian talk show, “Che Tempo Che Fa” (What the weather’s like).

A criminal, he said, must pay his or her debt to society, but still has a right to be forgiven.

In the hourlong interview, Pope Francis repeated what he often has said about the scandal of weapons’ sales and the futility of war, the obligation to protect the environment and the need for a better-coordinated European process for welcoming migrants and refugees.

Although Fazio did not ask specific questions about the clerical sexual abuse scandal, he asked the pope how he would like the church of the future to be and what he sees as the “critical issues” facing the church today.

Pope Francis responded, “I imagine the church of the future the way St. Paul VI imagined it after the (Second Vatican) Council with the apostolic exhortation, ‘Evangelii Nuntiandi,'” his 1975 document on need to creative new ways to share the Gospel message with the world.

Highlighting the ongoing relevance of the 1975 document, he said, “I added another that’s called ‘Evangelii Gaudium,’ but it’s not so original; it’s a plagiarism of ‘Evangelii Nuntiandi’ and Aparecida,” the document of the Latin American bishops he helped write after a meeting in Aparecida, Brazil, in 2007. The document called for a continent-wide missionary outreach.

And he told Fazio that the “greatest evil” in the church today is “spiritual worldliness — a worldly church.”

“This spiritual worldliness within the church makes an ugly thing grow: clericalism, which is a perversion of the church,” he said. It increases “rigidity” and a reliance on rules rather than on God.

In his response, and throughout the interview, Pope Francis insisted that Jesus’ incarnation and his death on the cross meant that Christian faith must take flesh in practical signs of love and care for others and in going out to preach the Gospel.

Pope Francis said people who are born in developed countries to families who always have enough to get by and where health care, education and jobs are fairly easy to come by must recognize that they are no more deserving of those things than a person born into poverty with little or no access to any of those things.

And while it is tempting to “look the other way” when the news reports on victims of war or migrants drowning or when one sees a person begging on the street, it is “a very ugly temptation.”

“It is not enough to see, one must feel it, touch it,” the pope said, add that allowing one’s heart to be touched and recognizing a victim as a person, a brother or sister, is the only way to move toward finding a solution.

“Praying,” he continued, “means looking at our limitations, our needs, our sins, and saying, ‘Daddy, look at me. Your gaze purifies me, gives me strength.'”

Being comfortable with addressing God as father, he said, is a sign that one is “doing well on the road of faith.”

The Italian journalist also asked Pope Francis how he is able to bear the weight of being concerned for the fate of the world and listening to so many individual stories of pain and suffering.

But the pope insisted that his burdens are not so great and pale in comparison to the challenges and truly awful things so many people endure every day.

“To tell the truth, I’m not a champion weightlifter,” he said. “I endure what most people endure.”

The pope also said he does have some good friends, “who help me, who know my life as a normal person — not that I am normal, no. I have my abnormalities — but like an ordinary man who has friends.”

“In fact, I need friends,” he said. “That’s one of the reasons why I didn’t go to live in the papal apartment, because the popes before me were saints and I couldn’t do it — I’m not so much a saint. I need human relationships, that’s why I live in this hotel, Santa Marta, where you find people to talk to, you find friends. It’s easier for me.”

Picture: Pope Francis is pictured during an interview with Fabio Fazio on the popular Italian talk show, “Che Tempo Che Fa,” in this screen capture from the programme televised by the Italian national broadcaster, RAI, on 6th February. (CNS photo/RAI)