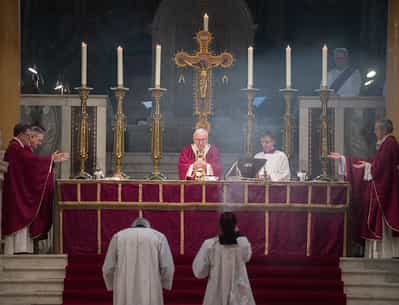 After more than two years, the Sunday obligation to attend Mass has been reintroduced for Catholics in the UK.

Cardinal Vincent Nichols announced the step during an online press conference on Tuesday 9th May. It will be implemented from Sunday 5th June, Pentecost Sunday. After the covid pandemic caused the closure of churches in March 2020, Catholics were forced to attend online Masses and to fulfil the Sunday obligation ‘in other ways.’ Now the Sunday obligation has been formally reintroduced.

“We invite all Catholics who have not yet done so to return to attending Mass in person. The reasons which have prevented Catholics from attending Mass on Sundays and Holy Days of Obligation no longer apply,” he announced.

Cardinal Nichols was speaking after the Bishops’ Conference of England and Wales’ plenary meeting, which took place in Cardiff from 2nd – 6th May 2022.

“Attending Mass on Sundays and Holy Days is the greatest of all privileges. The pressing challenges of the pandemic have lessened significantly. Our perception is that, now, there is freedom to attend Mass,” he said.

The bishops underlined the importance of gathering at Mass as a church community in a new statement. “As the Church needs the witness of the presence of each person, so too each believer needs to journey in faith and worship with their fellow disciples,” they said.

“Nourished by our encounter with the Risen Lord Jesus, fed with His Word and His Body and Blood in Holy Communion, and supported by the presence of each other, we receive strength week by week, to serve the Lord and glorify Him with our lives.”

The bishops have previously sought to encourage the faithful to take part in the Eucharistic celebrations, but they have stopped short of reintroducing the Sunday obligation. They acknowledged the benefits of ‘online streaming of Mass and other services’, but stressed that ‘“virtual viewing” of Mass online does not fulfil the Sunday Obligation.’ However, they did state that virtual viewing could be of benefit to the elderly and sick, and those who cannot attend Mass.

Cardinal Nichols also outlined other pressing issues discussed by the bishops during their plenary meeting, including the migrant issue.

“We support a concerted effort against human trafficking, but let’s not punish their victims,” he said. “Those seeking refuge in the UK should be provided with safe routes for travelling, have the opportunity to tell their story, be listened to and have their cases assessed justly.”

The Cardinal discussed the visit of the relics of St Bernadette as a means of encouraging the faithful to return to Lourdes on pilgrimage, whilst he said the bishops spent a long time reflecting on the ‘tensions and complexity’ of the conflict in the Ukraine.

He said there was frustration at the  difficulties people are experiencing in being allowed to house Ukrainian refugees. He also spoke of over 30 groups ‘building social alliances’ and ‘establishing caritas academy for the training of leaders’ to help diocese support the ‘food crisis’ and cost-of-living crisis.